The percentage of randomly selected 6 to 7 month olds with serum IgG anticapsular polysaccharide (PRP) antibody concentrations consistent with short-term protection (≥ 0.15 μg/mL) or long-term protection (≥ 1.0 μg/mL), in relation to the number of Hib vaccine doses received (as recorded on infants’ vaccination cards). Shown are the results of surveys conducted in (A) 2007 and (B) 2008. The prevalence of antibody increased with the number of doses of Hib vaccine received. The geometric mean concentration (GMC) of PRP antibody also increased with the number of doses. 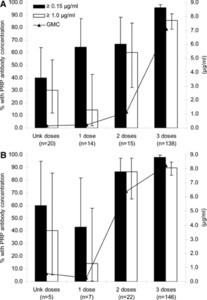