Mean virus concentration in PFUs of virus per 0.1 mL for 10-fold dilution series of (A) SLEV, (B) WNV, and (C) WEEV viruses plotted as a function of time immersed in a water bath maintained at 56°C. 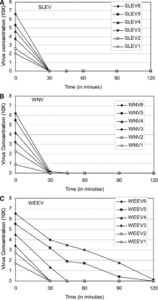 During the monitoring of arbovirus seroprevalence in wild birds collected in California, we inadvertently made two isolates of western equine encephalomyelitis virus (WEEV) from California quail sera being tested by plaque reduction neutralization assay for antibodies against St Louis encephalitis (SLEV) and West Nile (WNV) viruses despite heating the sera at 56°C for 30 minutes. These data prompted us to examine the thermostability of these viruses during heat treatment. The flaviviruses, SLEV and WNV, at titers up to 106 plaque-forming units (PFU), were readily inactivated by the standard protocol of heating at 56°C for 30 minutes. In contrast, solutions containing 105 and 106 PFU of WEEV required 2 hours for complete inactivation. Occasional presence of live virus within sera could lead to false negatives using standard plaque reduction neutralization test protocols.