Expressions of TNF-alpha, IL-10 and eNOS mRNA as quantitated by reverse transcriptase-polymerase chain reaction (RT-PCR). mRNA’s were examined in lung tissues of noninfected animals, (Controls; [C]), and 4, 7, 14, 21 and 28 days after inoculation with Leptospira intra-peritoneally injection. Each value represents the mean ± SD of five animals per group by day of experiment. Briefly: Control, noninfected (C). Control groups were lower compared with all others groups in the respective gene expression. 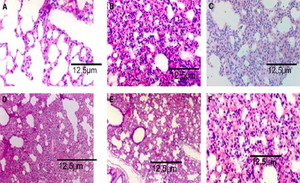 Our aim was to evaluate the pulmonary changes induced by Leptospira interrogans infection in hamsters, and the gene expression of endogenous mediators in lung fragments during 28 days of observation. The animals were euthanized on days 4, 7, 14, 21, and 28 post-inoculation. Histopathologic lung analysis showed hemorrhage, pneumonia, alveolar congestion, and infiltrated cellular areas, with increasing severity until day 21 post-inoculation. Tumor necrosis factor (TNF)-α mRNA expression enhanced in first days with peak on day 4 and slightly decreased in the final phase. The interleukin (IL)-10 remained relatively constant throughout the period, with the exceptions of days 4 and 14. The endothelial nitric-oxide synthesis (eNOS) showed an increased expression on day 4, followed by an augment on days 7 and 14, and remaining constant up to day 28 post-infection. Our results demonstrate that inoculation of L. interrogans sorovar Icterohaemorrhagiae induced pulmonary lesions, including pulmonary hemorrhage, supporting that the lung is a target organ.