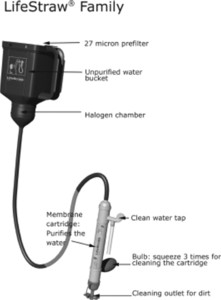 Interventions to improve water quality, particularly when deployed at the household level, are an effective means of preventing endemic diarrheal disease, a leading cause of mortality and morbidity in the developing world. We assessed the microbiologic performance of a novel water treatment device designed for household use in low-income settings. The device employs a backwashable hollow fiber ultrafiltration cartridge and is designed to mechanically remove enteric pathogenic bacteria, viruses, and protozoan cysts from drinking water without water pressure or electric power. In laboratory testing through 20,000 L (~110% of design life) at moderate turbidity (15 nephelometric turbidity unit [NTU]), the device achieved log10 reduction values of 6.9 for Escherichia coli, 4.7 for MS2 coliphage (proxy for enteric pathogenic viruses), and 3.6 for Cryptosporidium oocysts, thus exceeding levels established for microbiological water purifiers. With periodic cleaning and backwashing, the device produced treated water at an average rate of 143 mL/min (8.6 L/hour) (range 293 to 80 mL/min) over the course of the evaluation. If these results are validated in field trials, the deployment of the unit on a wide scale among vulnerable populations may make an important contribution to public health efforts to control intractable waterborne diseases.