Photomicrographs of the lungs of Swiss mice infected with Paracoccidioides brasiliensis. (A) One week after inoculation: start of the infection and organization of the granuloma. (B) Production of reticular fibers (arrow). (C and D) Two weeks after inoculation: amorphous and fragmented cells, budding yeasts, and reticular fibers impregnated by silver. (E and F) Four weeks after inoculation: an intensification of the infection was observed, with giant cells (arrow) with a tendency of centralization and more peripheral plasmocytes. (G) Eight weeks after infection: the presence of organized granuloma, with compact aggregates of macrophages, epithelial cells and yeasts in the central portion, and intense peripheral basophilia. (H) A greater quantity of reticular fibers encircling groups of yeast. Staining was carried out with hematoxylin and eosin (H&E) in (A, C, E, and G), and with Gomori–Grocott in (B, D, F, and H). This figure appears in color at www.ajtmh.org.

(A, B, C, D, and F) Photomicrographs of the lung parenchyma of Swiss mice infected with Paracoccidioides brasiliensis. (E) Non-infected lung stained with HE. In the infected lungs an increase in the amount of type I and III collagen fibers was observed in the granulomas stained by picrosirius, over time, as can be seen in figures (A, B, C, and D), which correspond to the first, second, fourth, and eighth weeks after inoculation, respectively. (F) Image stained with picrosirius without polarized light, corresponding to the sequential section in image (D), where a granuloma with yeast foci around the bronchus can be seen. This figure appears in color at www.ajtmh.org.

Photomicrographs of the lungs of Swiss mice infected with Paracoccidioides brasiliensis, and stained by the picrosirius technique, as modified by Dolber and Spach, 24 showing a granuloma 8 weeks after inoculation. A 63× objective NA1.2. Collagen fibers can be seen encircling the granuloma. This figure appears in color at www.ajtmh.org.

Photomicrographs of the lungs of Swiss mice infected with Paracoccidioides brasiliensis. Pycnotic structures (arrow) with the characteristics of apoptotic bodies in the granulomas of mice infected for (A) 1 week and (B) 8 weeks, using HE stain. This figure appears in color at www.ajtmh.org. 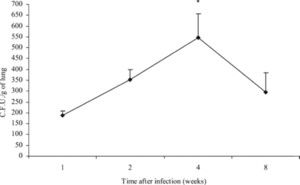 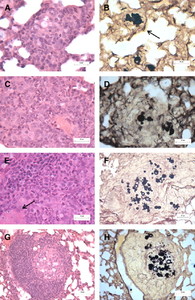 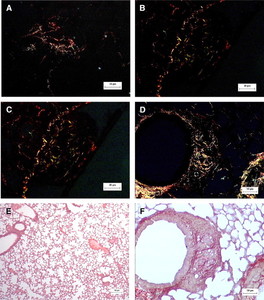 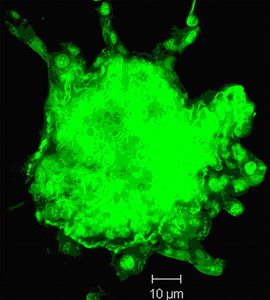 A morphologic study of the lungs was carried out in Swiss mice infected with yeast isolated from Paracoccidioides brasiliensis (Pb18). The lung was processed 1, 2, 4, and 8 weeks after inoculation for histologic staining with hematoxylin and eosin (H&E), methenamine silver nitrate (Gomori–Grocott), and picrosirius to qualitative and quantitative analyses of the granulomas and the presence of fungal lesions. The numbers of CFUs/g counted in the lungs were 189.8 ± 20.64, 353.6 ± 46.21, 547.2 ± 108.1, and 295.2 ± 89.17 in the first, second, fourth, and eighth weeks, respectively. One week after infection, inflammatory cells and reticular and collagens fibers, the latest typical of fibrosis, were detected. After 2 and 4 weeks, a progressive intensification of the infection and fibrosis was observed, but in week 8 a more organized granuloma was evident, with macrophages, epithelioid cells, and yeasts in the central portion, and intense peripheral basophilia. Pycnotic structures typical of apoptotic bodies were observed in weeks 1 and 8. The different histologic staining used acted as a fundamental tool for the study of the morphologic organization of granuloma formation.