Semi-quantitative RT-PCR for NOS isoforms in murine heart of control and T. cruzi–infected mice from wild-type and various NOS-null (KO) backgrounds at day 30 after infection. Representative gels showing NOS isoform expression in wild-type control (Con) and infected (Inf) mice (A). Representative RT-PCR gels showing NOS2 and NOS3 in NOS1-null mice (B), NOS1 and NOS3 in NOS2-null mice (C), and NOS1 and NOS2 in NOS3-null (D) mice. Data from two independent control (Con1 and Con2) and infected (Inf1 and Inf2) mice from wild-type and each null background are shown. In B–D, the respective NOS-null isoform was also amplified as a negative control. E, GAPDH RT-PCR as an internal control (N = 4 for each group).

Transverse cardiac gated end-diastolic MR images of hearts of infected and uninfected WT and NOS1- and NOS3-null Images of the NOS2-null mice are not shown, because they were similar to WT mice, although with a less robust increase in RVID. Left right ventricle (RV) are indicated by arrows. Images were acquired with a spin-echo sequence, FOV of 40 mm, and with TE = 18 ms, TR = ms, number of transients = 4, and 128 × 256 matrix size interpolated to 256 × 256. 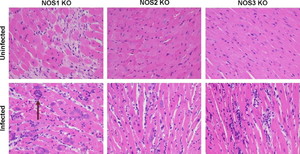 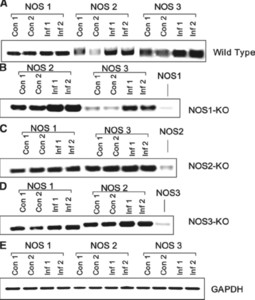 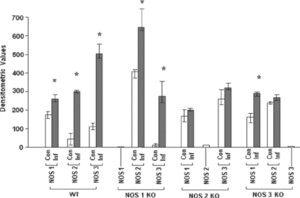 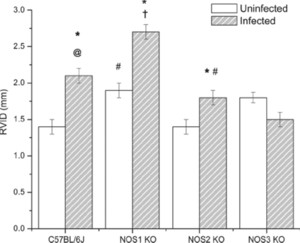 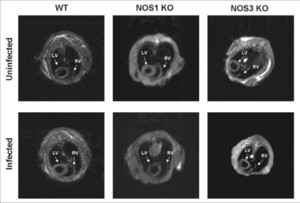