Age-specific prevalence of antigenemia (ICT), and anti-filarial antibody (Bm14) are plotted with squares and diamonds respectively for A) Afao, B) Asili and C) Seetaga. 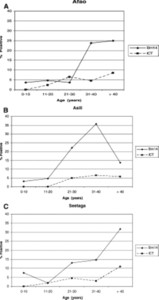 Assessing the interruption of lymphatic filariasis transmission after annual mass drug administration (MDA) requires a better understanding of how to interpret results obtained with the available diagnostic tools. We conducted parasitologic, serologic, and entomologic surveys in three villages in American Samoa after sentinel site surveys suggested filarial antigen prevalence was < 1% after five annual MDAs with diethylcarbamazine and albendazole. Antigen and antifilarial antibody prevalence ranged from 3.7% to 4.6% and from 12.5% to 14.9%, respectively, by village. Only one person was microfilaria positive. Although no children less than 10 years of age were antigen positive, antifilarial antibody prevalence in this age group was 5.1% and antibody-positive children were detected in all three villages. Wuchereria bancrofti–infected mosquitoes were also detected in all three villages. Thus, monitoring of infections in mosquitoes and antifilarial antibody levels in children may serve as indicators of local transmission and be useful for making decisions about program endpoints.