Cumulative percentage survival for early (L1–2) and late (L3–4) larval instars of Anopheles stephensi (As) and An. gambiae (Ag) in untreated (control) and Aquatain™-treated (17.5 μL, 35 μL, and 70 μL) larval trays. Percentages were not corrected for natural mortality.

Cumulative percentage survival for pupae of Anopheles stephensi (As) and An. gambiae (Ag) in untreated (control) and Aquatain™-treated (0.5 μL, 1.0 μL, and 2.0 μL) oviposition cups. 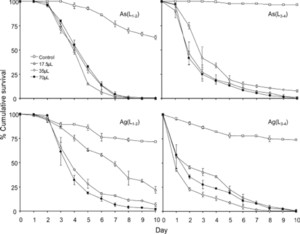 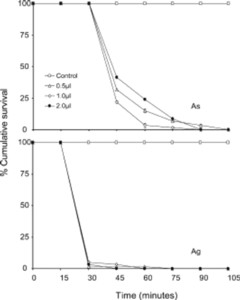 Efficacy of Aquatain™, a Monomolecular Surface Film, against the Malaria Vectors Anopheles stephensi and An. gambiae s.s. in the Laboratory

Monomolecular films are used for mosquito control because of their asphyxiating effect on larvae and pupae. Compared with other films, Aquatain mosquito formulation (AMF™) has an improved spreading ability and flexibility on a water surface. In the laboratory, AMF™ showed larvicidal, pupicidal, and oviposition deterrent effects against the malaria vectors Anopheles stephensi and An. gambiae. At a dose of 1 mL/m2, the median lethal time to death for late larval instars was 3.02 (95% confidence interval [CI] = 2.76–3.25) and 0.98 (95% CI = 0.75–1.20) days for An. stephensi and An. gambiae, respectively. None of the treated larvae pupated. Pupal mortality reached 100% within two hours for both species. AMF™ repelled gravid females from ovipositing in treated oviposition cups. Without the choice of an untreated cup, the lowered water surface tension caused most females to drown while attempting to oviposit. This physical control method has the potential to become a safe, cost-effective, and resistance-proof malaria vector control tool.