Layout of distance test experimental set-up with cages showing path of treatment from 10 meters to 50 meters using thermal fogger equipment. A total volume of 297 mL was applied over an area of 4,250 meters2 where 40 cages of adults mosquitoes were placed on 5 transects. Each plot represents 2 cages (each cage containing 20 females of either the Bora or Vauclin strain) fixed on poles.

Effect of insecticides with distance from the point of release on the knock-down effect 20 minutes post-treatment (A and B ), and mortality 24 hours post-treatment (C and D ) for the susceptible reference Bora strain (A and C ) and the locally caught wild-strain Vauclin (B and D). Means and standard errors are back-transformed arcsine square-root estimates from the analysis in Table 2. This figure appears in color at www.ajtmh.org. 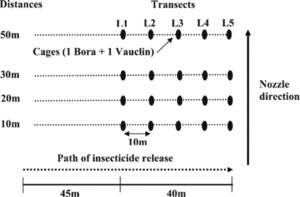 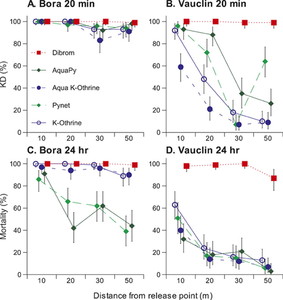 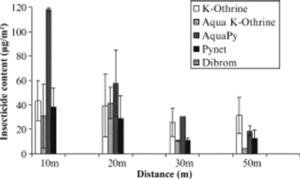 In the Caribbean, insecticide resistance is widely developed in Aedes aegypti and represents a serious obstacle for dengue vector control. The efficacy of pyrethroid and organophosphate ultra-low volume space sprays was investigated in Martinique where Ae. aegypti has been shown to be resistant to conventional insecticides. In the laboratory, a wild-field caught population showed high levels of resistance to deltamethrin, organophosphate (naled), and pyrethrum. Simulated-field trials showed that this resistance can strongly reduce the knock-down effect and mortality of deltamethrin and synergized pyrethrins when applied by thermal-fogging. Conversely, the efficacy of naled was high against insecticide-resistant mosquitoes. Chemical analyses of nettings exposed to the treatments showed a decrease in residues over distance from release for the pyrethroids, and naled was not detected. This finding has important implications for dengue vector control and emphasizes the need to develop innovative strategies to maintain effective control of resistant Ae. aegypti populations.