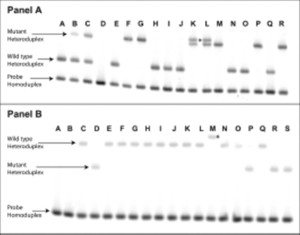 Several single nucleotide polymorphisms (SNPs) have been linked to antimalarial drug resistance in Plasmodium falciparum. However, standard polymerase chain reaction (PCR) methods to detect these polymorphisms are unable to detect SNPs in variants representing < 20% of the parasites in a mixed infection, nor can they detect polymorphisms at nearby loci. Here we use heteroduplex tracking assays (HTAs) to analyze dhps540 mutations in 96 samples from Peru and pfcrt76 mutations in 70 samples from China. All samples had been previously analyzed by standard PCR. We detected drug-resistant minority variants and two novel non-synonymous pfcrt mutations in China. In Peru, we found no drug-resistant minority variants and a synonymous mutation in dhps. Thus, even in regions of low malaria transmission, HTA assays are more informative than PCR with agarose gel electrophoresis.