Patterns of linkage disequilibrium (LD) between pairs of tandem repeat (TR) markers in four populations of Plasmodium vivax from the Brazilian Amazon. Shading denotes significant LD at the 5% level. 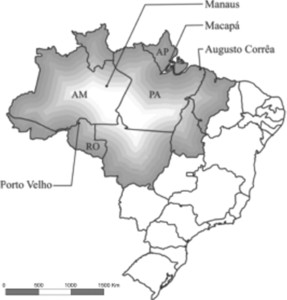 Few genetic markers have been described to analyze populations of Plasmodium vivax. The genetic variability of P. vivax has been analyzed mainly among isolates taken from areas ranging from hyper- to holoendemic areas. These studies of genetic variability have neglected many areas with different epidemiologic profiles. The purpose of this study was to analyze the genetic variability of P. vivax isolates from four different Brazilian Amazon areas. We chose to study the five most polymorphic tandem repeats (TRs) identified so far. All TRs studied were polymorphic in at least one studied population, with a modal allele at nearly all loci. Expected heterozygosity ranged from 0.462 to 0.666 and did not correlate with the repeat array length. The genetic distances among the populations varied from 0.027 to 0.241, and did not correlate with their geographic separation. Tandem repeats identified in P. vivax isolates failed to allow geographic clustering.