Flow chart describing enrollment and follow-up of patients with regard to malaria status.

Kaplan–Meier survival curves of patients with severe sepsis and negative malaria smears who did or did not receive arte-mether-lumefantrine (A-L).

Kaplan–Meier survival curves comparing combined in-patient and 30 day mortality (means and 95% confidence intervals) of patients with severe sepsis, a negative malaria smear, and a Karnofsky Performance Score ≤ 50 who did or did not receive artemether-lumefantrine (A-L). 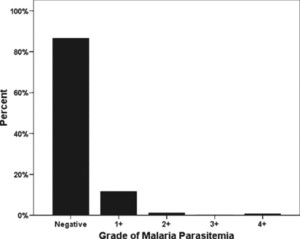 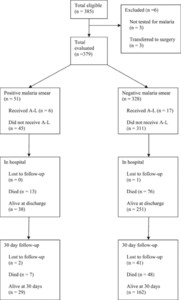 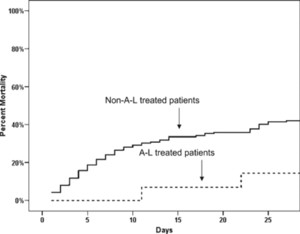 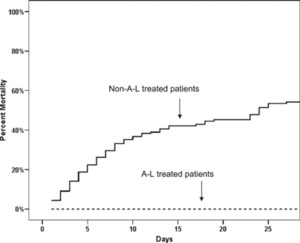 We enrolled 382 patients at two hospitals in Uganda in a prospective observational study of severe sepsis. Because artemisinins improve survival in murine sepsis models, we performed a post hoc analysis of the association between the use of artemether-lumefantrine (A-L) and mortality in patients with or without malaria. In patients with negative malaria smears (N = 328 of 379), Kaplan–Meier curves revealed decreased combined inpatient and 30-day mortality among patients receiving A-L versus those who did not (20.6%, SE = 10.6 versus 48.8%, SE = 3.2; Log rank χ2 = 3.93, P = 0.048). The decrease in mortality associated with A-L was maintained in the most clinically ill patients determined by Karnofsky Performance Scores ≤ 50 (16.7%, SE = 15.2 versus 58.3%, SE = 3.7; Log rank χ2 3.94, P = 0.041). Research into the properties of A-L is needed to improve treatment of sepsis without compromising malarial susceptibility.