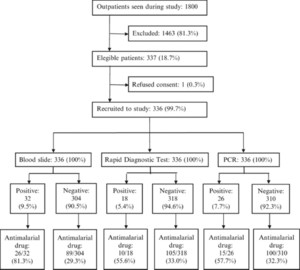 The study was aimed to evaluate the malaria over/underdiagnosis and over/underprescription of antimalarial drugs. Between February and March 2007 blood samples were collected from 336 non-severe febrile outpatients attended in two peripheral Tanzanian hospitals. Microscopy and a rapid diagnostic test (RDT) were done locally and the accuracy evaluated by qualitative polymerase chain reaction (PCR) for Plasmodium spp. The testing was performed at National Institute for Infectious Diseases Lazzaro Spallanzani (INMI), Rome, Italy. As a result of PCR, we identified 26 malaria cases out of 336 (7.7%) patients. Microscopy and RDT accuracies were 93.5% and 97.6%, respectively. Overprescription and underdiagnosis rates were 29.3% and 30.8%, respectively. On-field training, clinical management of febrile illness, and malaria microscopy in remote settings should be considered.