Map of Bolivia. Administrative departments (A). Stratification of municipalities according to incidence of leishmaniases in 2006 (B). This figure appears in color at www.ajtmh.org.

Number of localized cutaneous leishmaniasis cases in reported in Bolivia 1983–2006.

Clinical spectrum and diagnosis of leishmaniases cases in Bolivia. Cases can be either localized cutaneous (A), mucosal (B,C), diffuse cutaneous, or visceral leishmaniasis. This figure appears in color at www.ajtmh.org. 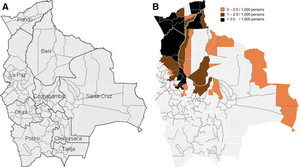 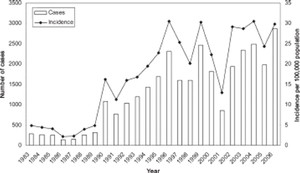 The leishmaniases are protozoan, zoonotic diseases transmitted to human and other mammal hosts by the bite of phlebotomine sandflies. Bolivia has the highest incidence of cutaneous leishmaniasis (CL) in Latin America (LA), with 33 cases per 100,000 population reported in 2006. CL is endemic in seven of the country’s nine administrative departments. Visceral leishmaniasis (VL) is comparatively rare and is restricted to one single focus. Most CL cases are caused by Leishmania (Viannia) braziliensis (85% cases); VL is caused by L. (L.) infantum. Seven sandfly species are incriminated as vectors and Leishmania infections have been detected in several non-human mammal hosts. Transmission is associated with forest-related activities, but recently, cases of autochthonous, urban transmission were reported. Because most cases are caused by L. (V.) braziliensis, Bolivia reports the greatest ratio (i.e., up to 20% of all cases) of mucosal leishmaniasis to localized CL cases in LA. Per national guidelines, both CL and VL cases are microscopically diagnosed and treated with pentavalent antimony.