A contrast-enhanced computed tomographic scan (A) of the head shows multiple cysts with hyperdense scolices in the brain parenchyma and the temporalis muscles. The non-contrast image (B) revealed calcification in many of the lesions.

A magnetic resonance imaging of the head done 4 months later shows multiple intraparenchymal viable cysts containing clear fluid that appears hypodense on T1-weighted (A) and hyper-dense on T2-weighted (B) axial sections. Scolices, seen protruding inside the cysts, are diagnostic of cysticercosis. On a coronal section (C), cysts are seen infiltrating the cranial muscles and the tongue. Two subconjuctival cysts are present in the left eye (D, arrows). This figure appears in color at www.ajtmh.org. 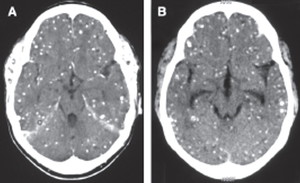 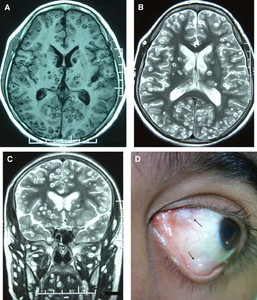 A 17-year-old boy from a northern Indian village presented with recurrent episodes of secondarily generalized tonic-clonic seizures since 12 years of age. He had been diagnosed earlier as cysticercotic encephalitis (Figure 1) with features of intracranial hypertension. Despite being on dexamethasone (8 mg/d) and adequate doses of three anti-epileptic drugs (valproic acid 1250 mg/d; phenytoin 300 mg/d; and clobazam 20 mg/d), he continued to have one to two seizures every month. He denied consumption of pork. Magnetic resonance imaging of the head, done 4 months later, revealed innumerous viable cysticerci containing clear fluid and a scolex (“hole-with-dot” sign1) in the brain parenchyma, scalp and facial muscles, and the tongue (Figure 2). No inflammation was evident around the cysts, on imaging. Two translucent subconjuctival cysts containing a buff-colored scolex were present in his left eye (Figure 2). No focal neurologic deficit was apparent. Funduscopy was unremarkable. Treatment with cysticidal drugs, such as albendazole and praziquantel in patients with cysticercotic encephalitis, could precipitate a life-threatening elevation of the intracranial pressure and hence is contraindicated.2 It remains unclear whether antiparasitic treatment can be given once the inflammation subsides. Cysticidal treatment was deferred in this patient, and anti-epileptic drugs alone were continued.