Impact in Nigeria. A, Dracunculiasis: number of cases. Source: Nigerian Guinea Worm Eradication Program, Federal Ministry of Health, 2008. B, Onchocerciasis: nodule prevalence in adults. Source: unpublished data based on nodule palpation surveys of 30 adult samples in each of 11 villages in Plateau 1992/93) and Plateau and Nasarawa States (2007), courtesy of J Umaru. C, LF: antigenemia in humans. Unpublished data based on 2000 and 2007 surveys for LF antigenemia using ICT card tests 3,4,8 in 10 sentinel villages (50 persons per village) in Plateau and Nasarawa States, courtesy of A Eigege. D, urinary schistosomiasis: blood in urine (dipstick positivity) in school children. Source: based on rapid heme dipstick reagent testing of school children, adapted from Hopkins and others.3 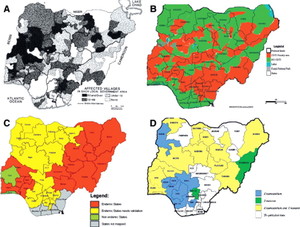 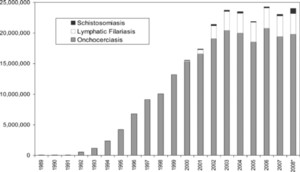 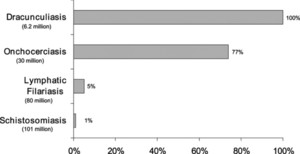 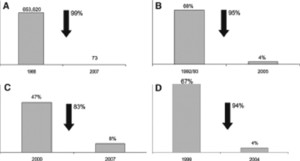 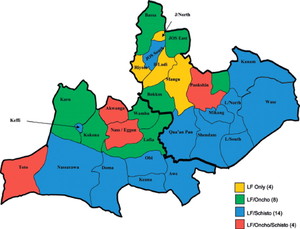 Africa’s populous country, Nigeria, contains or contained more cases of dracunculiasis, onchocerciasis, lymphatic filariasis, and schistosomiasis than any other African nation and ranks or ranked first (dracunculiasis, onchocerciasis, schistosomiasis) or third (lymphatic filariasis) in the world for the same diseases. After beginning village-based interventions against dracunculiasis 20 years ago and confronting onchocerciasis a few years later, Nigeria has nearly eliminated dracunculiasis and has provided annual mass drug administration for onchocerciasis to over three quarters of that at-risk population for 7 years. With assistance from The Carter Center, Nigeria began treating lymphatic filariasis and schistosomiasis in two and three states, respectively, over the past decade, while conducting pioneering operational research as a basis for scaling up interventions against those diseases, for which much more remains to be done. This paper describes the status of Nigeria’s struggles against these four neglected tropical diseases and discusses challenges and plans for the future.