Distribution of rodents sampling sites during 2005 and 2007, Beijing, People’s Republic of China. 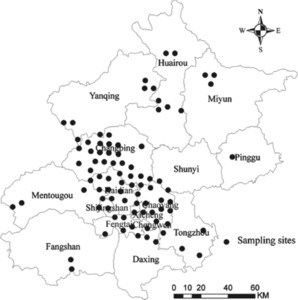 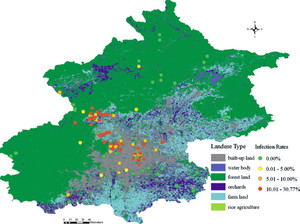 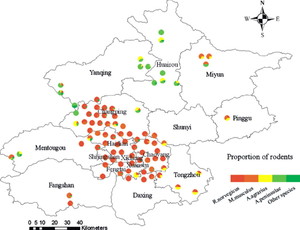 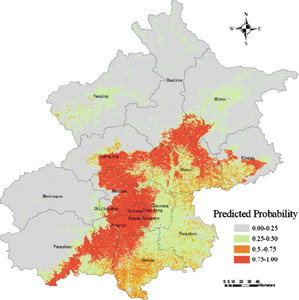 Predicting the Risk of Hantavirus Infection in Beijing, People’s Republic of China

To understand the spatial distribution of hantavirus infections across landscapes and its influencing environment factors in Beijing, People’s Republic of China, rodents captured in this region were examined for hantavirus by reverse transcription–polymerase chain reaction. A total of 1,639 rodents were trapped at 86 randomly selected sites. The overall infection rate for hantavirus was 7.14% in the rodents. Multivariate logistic regression analysis indicated that the natural infection rates for hantavirus in rodents were significantly associated with rice agriculture (odds ratio [OR] = 2.88, 95% confidence interval [CI] = 1.27–30.70), orchards (OR = 1.12, 95% CI = 1.02–5.96), and moderate elevation (OR = 9.83, 95% CI = 2.22–43.55). A risk map was constructed on the basis of these significant factors to predict extension and transmission of infection with hantavirus in this region.