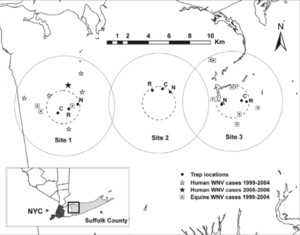 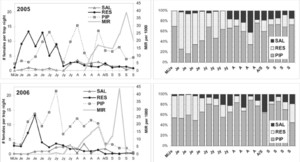 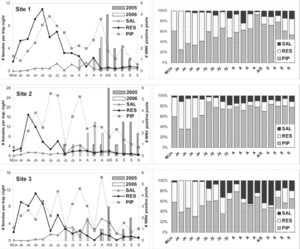 Culex species were monitored at three proximate sites with historically different West Nile virus (WNV) activities. The site with human WNV transmission (epidemic) had the lowest abundance of the putative bridge vectors, Culex pipiens and Cx. salinarius. The site with horse cases but not human cases (epizootic) had the highest percent composition of Cx. salinarius, whereas the site with WNV-positive birds only (enzootic) had the highest Cx. pipiens abundance and percent composition. A total of 29 WNV-positive Culex pools were collected at the enzootic site, 17 at the epidemic site, and 14 at the epizootic site. Published models of human risk using Cx. pipiens and Cx. salinarius as the primary bridge vectors did not explain WNV activity at our sites. Other variables, such as additional vector species, environmental components, and socioeconomic factors, need to be examined to explain the observed patterns of WNV epidemic activity.