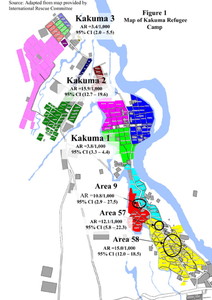 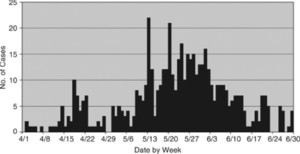 An outbreak of watery diarrhea struck within the Kakuma refugee camp in Kenya in April 2005; 418 people were treated, and 4 persons died. Vibrio cholerae O1 was isolated from 33 patients. In June 2005, we conducted a retrospective matched case-control study to define risk factors associated with cholera among camp residents and identify interventions that could prevent further cases and future outbreaks. We identified cases of cholera through medical records at the main health facility in the camp and matched controls (without watery diarrhea since November 2004) to the cases by age category (< 2, 2–4, 5–14, and > 14 years) and location of residence within the camp. Cases were defined as any person of any age with profuse, effortless watery diarrhea (three or more stools in 24 hours). A multivariate model showed that storing drinking water at home in sealed or covered containers was protective against cholera (matched odds ratio [MOR] = 0.49 [0.25, 0.96]), whereas “sharing a latrine with at least three households” (MOR = 2.17 [1.01, 4.68]) and arriving at the Kakuma camp on or after November 2004 (MOR = 4.66 [1.35, 16.05]) were risk factors. Improving sanitation and promoting methods to ensure safe drinking water are likely to be effective measures in moderating future cholera outbreaks in this setting. Higher risks for cholera illness among refugees recently “in-migrated” suggest that there may be value in targeting new arrivals in the camp for risk reduction messages and interventions, such as covered water storage containers, to prevent cholera.