Study flow diagram of refugee screening and testing for latent tuberculosis infection with the QFT-GIT and the TST.

Three measures of agreement (κ, positive agreement, negative agreement) between TST and initial QFT-GIT, computed as the minimum value for a positive reading on the QFT-GIT, which varies from 0 to 2.0. The recommended value is 0.35, indicated by a vertical line.

Change from first to second QFT-GIT for 159 subjects. Dots above the dashed line at 0.35 had a positive reading on the QFT-GIT. A second QFT-GIT measurement of −6.1 is not shown. 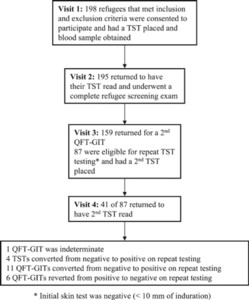 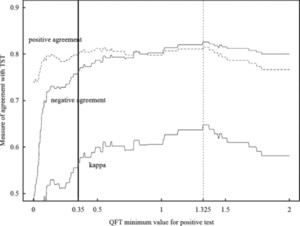 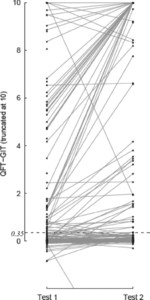 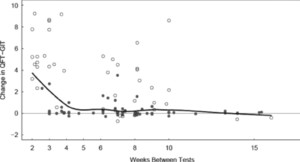 Screening for latent tuberculosis infection (LTBI) in refugee populations immigrating to low-incidence countries remains a challenge. We assessed the characteristics of the QuantiFERON-Gold In-Tube (QFT-GIT) compared with the tuberculin skin test (TST) in 198 refugees of all ages from tuberculosis-endemic countries. Diagnostic agreement between the first QFT-GIT and simultaneous TST was 78% (κ = 0.56) and between serial QFT-GITs was 89% (κ = 0.76). In serial QFT-GIT testing, 70% of subjects had an increased QFT-GIT value, perhaps the result of an antecedent TST in the setting of previous TB exposure. This boosting seemed to become less prevalent with time from TST and occurred less frequently in those with negative first QFT-GIT readings. Despite small changes in the quantitative results caused by nonspecific variation and boosting, the diagnostic result of the QFT-GIT was reliable. The QFT-GIT shows the potential to replace the TST for LTBI screening in refugees from tuberculosis-endemic areas.