Incidence of Rocky Mountain spotted fever cases in the United States for A, American Indians and B, all other persons, 2001–2005, United States, National Electronic Telecommunications System for Surveillance. 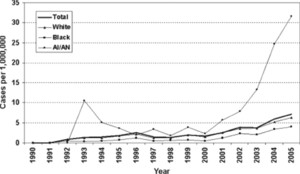 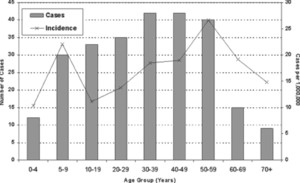 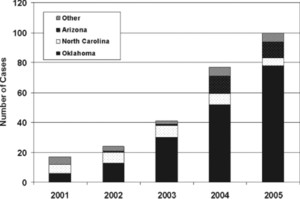 Rocky Mountain spotted fever (RMSF) is a tick-borne zoonotic disease caused by infection with Rickettsia rickettsii.1–3 Ticks, primarily the American dog tick (Dermacentor variabilis) and the Rocky Mountain wood tick (Dermacentor andersoni), serve as the reservoir and the vector for RMSF in the United States. The common brown dog tick (Rhipicephalus sanguineus), has also been recently identified as a vector for human disease in parts of eastern Arizona.4 Rocky Mountain spotted fever is reported throughout most of the contiguous United States, and the annual incidence rate has increased from 2.0 cases per 1,000,000 persons in 1992 to 3.8 cases in 2002 per 1,000,000 persons annually. 1,2,5 However, because RMSF is difficult to diagnose, the number of actual RMSF cases is probably much higher than the studies of national reporting data suggest.

Symptoms of RMSF typically include acute onset of fever, headache, and myalgia within 14 days of a bite from an infected tick.5 Severe cases may include acute respiratory distress syndrome, disseminated intravascular coagulopathy, and multi-organ failure. Tetracycline antibiotics are efficacious in the treatment of RMSF, and doxycycline is recommended for patients. 6,7 The case-fatality rate has been reported to be 1.2–5.8%,8 but approached 60% in the pre-antibiotic era.9 A mean of 37 deaths (range = 16–64) was estimated to occur annually during 1983–1998.10

Although data from the CRF system are not as complete as the RMSF data through NETSS in terms of overall case numbers and therefore are not useful for calculating incidence rates, CRF data enable assessment of clinical information on cases and monitoring of trends in RSMF-related hospitalizations and fatalities. Because RMSF data are reported to both systems without patient identifying information, the two systems cannot be reliably combined. In the present study, national RMSF case data reported during 2001–2005 through the NETSS and CRF system were analyzed to examine and describe the epidemiology and trends of RMSF for American Indians.

Cases of RMSF reported to CDC by state health departments and private physicians through NETSS and through the Tick-Borne Rickettsial Disease CRF system for 1990–2005 were selected for the present study. 1,15,16 Cases reported by states to NETSS that met either confirmed or probable RMSF definition were considered to be RMSF cases in this study. The RMSF case definition during the study period included designations for confirmed RMSF (positive culture, demonstration of Rickettsia spp. in a clinical specimen by polymerase chain reaction or immunohistochemical test, or at least a four-fold change in serologic titers from acute-phase and convalescent-phase specimens) and probable RMSF (those cases with at least a single positive titer). 17,18 However, NETSS data were not specifically examined according to case status (i.e., probable versus confirmed cases) because the system does not permit assessment of the accuracy of stated case status. Some characteristics in the present study had missing or unknown information, which was excluded from the analysis; race was missing for 15% of cases reported through NETSS.

Incidence rates for RMSF were calculated using cases reported through NETSS and the corresponding census population for 1990 through 2005. 15,19 Incidence rates were expressed as the number of RMSF cases per 1,000,000 persons of the corresponding population. Annual incidence rates were calculated overall and by race group. Average annual incidence for the study period of 2001–2005 was examined by sex, age, race, and state of residence. Incidence for American Indians was compared with the other racial groups (white, black, and Asian/Pacific Islander). Rates for characteristics were compared using Poisson regression analysis to determine the risk ratios (RRs) and 95% confidence intervals (CIs). 20 Age was compared between groups using the Wilcoxon rank-sum test.21

Because NETSS does not collect detailed clinical information on cases, RMSF cases for 2001–2005 were further examined by CRFs submitted to CDC by state health departments. The CRFs were examined to identify risk factors for severe illness, including hospitalization and outcome. Because CRFs included information on laboratory test results, reports were reviewed by CDC staff for accuracy of case status assignment and, in some cases, adjusted as to confirmed or probable RMSF case designations. The case-fatality rate was calculated from CRFs and defined the proportion of persons for whom outcome was reported as death caused by RMSF. Comparisons of clinical characteristics were analyzed using the chi-square test or Fisher’s exact test (two-sided).

For 2001–2005, a total of 4,224 RMSF cases with a race group designation were submitted to CDC by CRFs; 227 RMSF cases (5.3%) were reported for American Indians. The CRF RMSF submissions appeared to parallel the NETSS RMSF submissions, and showed an increase comparable to the observed increase in RMSF cases via NETSS among all races.

Although the incidence of RMSF has recently increased in the United States, the proportional rate of increase has been significantly greater among American Indians than in other race groups during 2001–2005. This difference is in sharp contrast to historical trends suggesting that American Indians have shown RMSF incidence rates that appear only slightly higher than other racial groups within the United States. The recent dramatic increase suggests that RMSF may be emerging as a more serious cause of disease among American Indians than has been previously understood.

During 2001–2005, the most dramatic increases of RMSF among American Indians were reported from Oklahoma and Arizona. The recent identification of the brown dog tick as a cause of RMSF in Arizona likely accounts for some of the observed increase in cases reported from that state.4 The role of Rhipicephalus sanguineus as a possible factor in RMSF transmission for other American Indian populations, especially those residing in Oklahoma, has not been assessed but deserves serious exploration.

American Indians have been previously shown to have a higher incidence of RMSF than the U.S. general population in other studies. 13 Explanations for the differences in incidence for American Indians compared with other races may relate to social or anthropogenic factors resulting in increased rates of infection. For example, American Indians may typically live in more rural areas than other race groups, or may engage in recreational, social, or community activities that more frequently expose them to ticks, putting them at a high risk for RMSF. 13 Although increased rate of exposures offers a plausible explanation for increased incidence, it is unclear why those factors would have changed so dramatically beginning in 2001.

Another plausible explanation for the dramatic increase in incidence of RMSF among American Indians compared with other race groups may be related to changes in how cases are recognized and subsequently reported for this group. In this study, American Indians with RMSF were more likely to be classified as confirmed cases than other race groups. One possible explanation is that because some American Indians are able to obtain pre-paid healthcare, these persons may be more likely to undergo specific laboratory tests to aid an official diagnosis. Recognition and reporting of less severe RMSF appears to have improved more substantially among American Indians than for other race groups during the study period because the proportion of hospitalized cases decreased more substantially among this population. Recent publications and media attention highlighting RMSF risks and emergence among American Indian populations may have improved physician knowledge of RMSF in this population and thus influenced detection and reporting of some cases. 4,13,14

This study suggests that particularly among children with RMSF, American Indian children experience a disproportionately higher case-fatality rate than was seen for children among other racial groups. The health disparities impacting care for American Indian children with RMSF are not well understood. Rocky Mountain spotted fever presents a clinical dilemma for physicians because it typically is manifested as a non-specific febrile illness that resembles other common childhood illnesses. 22 Rash may not develop for several days after onset, and the rash may be initially difficult to see in persons with darker skin tones, possibly causing a delay in clinical suspicion for RMSF. Even in more severe manifestations, diseases such as meningococcemia are usually considered higher on a list of diseases ruled out by physicians. 22 The early initiation of empiric therapy with doxycycline is imperative to reduce the likelihood of severe or fatal outcome for RMSF, but physicians may be reluctant to provide empiric tetracycline therapy for children because of unfounded concerns regarding dental staining. 22 More studies to understand the clinical issues related to higher case-fatality rates among American Indian children with RMSF are clearly needed.

The national surveillance systems used in this study have limitations. In general, RMSF is believed to be under-recognized and under-reported to NETSS because of the non-specific nature of clinical manifestations and the need to procure appropriate laboratory tests for diagnosis. However, NETSS is a passive data collection system, and there is no way to verify the accuracy of each RMSF case report submitted to CDC, which is an inherent problem of using NETSS data to determine national incidence rates. Any RMSF surveillance system designed to maximize case capture should include the possibility of a diagnosis based on serologic test results alone because these are the most widely available and commonly applied diagnostic tools. However, with this requirement comes the possibility of overestimating case counts because of difficulty in interpreting serologic laboratory findings, especially for cases in which presence of antibody from previous exposures or the presence of cross-reactive antibodies may result in an incorrect designation of probable RMSF infection. Interpretation is further hampered by the number of commercially available diagnostic tests and the wide variation in serologic cutoff values viewed as representing a positive RMSF case.

The Tickborne Rickettsial Disease CRF system provides a slightly more stringent assessment of the accuracy of confirmed and probable RMSF reports because laboratory data are supplied at the time of report and reviewed by CDC staff members. The CRFs also collect more detailed RMSF-related information than NETSS, enabling assessment of important clinical parameters such as hospitalization and case-fatality rates. However, states are not mandated to report cases by this system, making it an inappropriate choice for determining national incidence. Only by examining both surveillance systems can the national RMSF picture be ascertained.

The disproportionate increase in the incidence of RMSF among American Indians compared with each of the other race groups during 2001–2005 is striking. Regardless of whether the observed findings represent a true increase in case occurrence or merely improved recognition and reporting, there appears to be no question that American Indians experience rates of RMSF that are much higher than those observed for other racial groups. The high morbidity rate and occurrence of serious illness and death associated with RMSF, especially among children, necessitates further consideration of RMSF as an important public health issue among American Indians. Prevention efforts are clearly needed specifically for American Indian populations, and a detailed understanding of the social and cultural factors influencing disease transmission are needed to appropriately target those messages. Tick-borne disease education and awareness should be provided to IHS and tribal physicians on the diagnosis, treatment, and risk factors of RMSF and other tick-borne diseases. Prompt appropriate antibiotic treatment is important, especially for children within high-risk areas. These prevention strategies are important to improve the awareness and treatment of RMSF and to reduce the burden of tick-borne disease among American Indians.