Seasonal variation of indicator disease discharges. This figure appears in color at www.ajtmh.org. 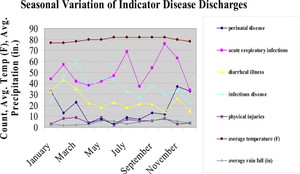 The objectives of our study were to describe the epidemiology of child-health indicator diseases in western Jamaica, examine differences in indicator diseases between sex and age, and generate hypotheses about causes of disease burden. International Classification of Disease, 10th Revision, coded discharge diagnoses were collected from consecutive admissions for 2003–2005 from a public tertiary care hospital. Mortality data were not coded. Perinatal disease was the most common cause of mortality, with hyaline membrane disease the primary cause. Younger children, particularly males, are disproportionately affected by all indicator diseases (P < 0.001) and more likely to die from acute respiratory tract infections and infectious diseases (P < 0.05). Sickle cell disease was the fourth most common diagnosis. Children in western Jamaica are most affected by diseases of prematurity. These children experience disease burden similar to that of children in other developing countries, but fewer neonatal sepsis and insect-borne infections, and more hematologic illness.

Over the past decade, a number of initiatives have been developed to improve the health of the global pediatric population. One such initiative is the Children’s Environmental Health-Indicator Diseases of the World Health Organization, which promotes the study of five health-indicator diseases to better understand the relationship between children’s health and their surrounding environments. The five health-indicator diseases provide a useful framework for studying the burden of pediatric disease in developing countries and include perinatal disease, acute respiratory illness, diarrheal disease, insect-borne infections, and physical injuries.1 These diseases affect approximately 8.5 million children less than 15 years of age each year in developing countries. Approximately 90% of the deaths from these diseases occur in children less than one year of age.1

Although numerous studies of these diseases in developing countries have been conducted, except for a few studies on perinatal disease, only scant information exists about these diseases in Jamaica.2 This study describes the epidemiology of the indicator diseases and differences between sex and age of those affected, and generates hypotheses about disease burden etiology in children in western Jamaica, which is currently lacking.

The study was conducted in Montego Bay (population = 1.3 million), a major city in western Jamaica. This city is located at sea level and has a yearly temperature range of 78–94°F and a rainy season from June through August.3 Its population consists of nearly 500,000 children 0–9 years of age; the infant mortality rate is 17/1,000 live births, and the per capita gross domestic product was nearly U.S. $4,0004 in 2005.

The study had a retrospective, cross-sectional, descriptive design and used discharge diagnoses and mortality records. Data were obtained from Cornwall Regional Hospital (CRH), a regional tertiary care facility in Montego Bay (St. James Parish). This hospital is the only public hospital in the western region of Jamaica; it provides immediate care for Montego Bay. The hospital has a 25-bed inpatient pediatric unit, a 15-bed neonatal care unit with one ventilator, and a two-bed pediatric intensive care unit.

Morbidity data were obtained from pediatric admissions only and included age, sex, date of admission and discharge, city and parish of residence, and International Classification of Disease, 10th Revision (ICD-10) codes. Data were collected from January 1, 2003 through December 31, 2005. The ICD-10 codes at CRH were entered by coding department staff on the basis of discharge diagnoses provided by the attending physician according to clinical manifestations and course, radiographic data, laboratory values (e.g., cerebrospinal fluid), and microbiologic cultures. A chart review to ascertain an organism for each case was not performed. Pediatric mortality data collected from CRH was kept in a paper form and not coded according to ICD-10 standards. The attending physician or pathologist attributed the cause of death, the latter if an autopsy had been performed. Institutional Review Board approval was obtained from CRH.

Data were entered into SPSS version 11 software (SPSS, Inc., Chicago, IL) by one of the authors (JEM), and statistical analyses were performed. Chi-square analyses were conducted to examine differences in categorical variables, and odds ratios were calculated by comparing children affected by the specified indicator disease with children from St. James Parish matched for sex and age but not affected by the specified indicator disease. A P value of 0.05 indicated statistical significance.

Diagnoses in children who died.

Among the 289 survivors, 94% were 0–4 years of age. Infectious diseases were the most common causes (99.4%), and younger males were affected more than females (P = 0.011) (Table 3). Disease burden was greatest during February, which is not the rainy season (Figure 1). Death from diarrhea, which was less common than death from dehydration, occurring infrequently, with only two deaths (1.4%), both in younger males.

This study describes the burden of indicator diseases in hospitalized children from a city in western Jamaica, quantifies the disparities of the indicator diseases between sex and age, and describes their seasonal variation. The limitations of this study center on data acquisition and selection bias caused by the source of the data. First, 7.9% of deaths and 2.1% of discharge diagnoses had no parish data recorded, which could lead to low risk ratios with wider confidence intervals. Second, the 2005 population was an average of the 2003 and 2004 data because the 2005 population data could not be ascertained. Third, some cases for each of the health indicators warranted hospitalization, but were never brought to a hospital, died in route to a hospital, or saw a non-traditional doctor. Although there are no other public hospitals in St. James Parish and only one (small) private hospital, some children could have been seen at private institutions.

The primary cause of pediatric morbidity and mortality in Jamaica 25 years ago was gastroenteritis, accounting for 36% of all admissions in children less than five years of age and 26% of all deaths in children 1–4 years of age.5 Our study has shown that diseases related to prematurity in children from western Jamaica have replaced the burden of illness caused by gastroenteritis. This finding represents a success for the National Program for the Control of Diarrhea Diseases, but highlights the need for improved perinatal care.

These findings of this study supports those of Trotman and others on admitting diagnoses and outcomes of neonates admitted to the neonatal intensive care unit requiring ventilatory support in Kingston, Jamaica.2 These investigators found that respiratory distress syndrome is the primary cause of admission and only 52% of those ventilated survive.2 Our findings are also similar to studies of hospitalized children in Bamako, Mali,6 and Dakar, Senegal,7 in which 54% of pediatric deaths occurred in the neonatal period and 48.9% pediatric deaths are caused by prematurity. Surfactant (e.g., Servanta) is provided only to children whose families can afford it (more than U.S. $450 per 4-mL vial). The presence of only one ventilator at CRH likely contributes to the high mortality rate from hyaline-membrane disease.

Acute repertory infections and diarrheal illnesses in Jamaica cause a burden of disease similar to those reported by Menge and others 10 in hospitalized children in western Kenya. However, there are no peak seasons that correspond to increased events in any of the indicator diseases compared with countries with significant rainy seasons. Given that 16%, 81%, and 87% of Jamaican children received adequate vaccination for Hemophilus influenza type B during the study years of 2003, 2004, and 2005, respectively, a large portion of the agents causing lobar and bronchopneumonia in 2004 and 2005 were likely Streptococcus pneumonia, with a conservative incidence of 111/100,000 based on studies from similar settings. 11,12 Pneumococcal vaccination with PCV9 has proved efficacious in other developing countries. However, because the per capita gross domestic product in Jamaica exceeds U.S. $1,000, this country is not eligible for support from the Global Alliance for Vaccinations and Immunization. Thus, any support for pneumococcal vaccination, or the study thereof, will have to come from alternative sources or the government.

The ICD-10 codes for respiratory illnesses caused by respiratory syncytial virus (RSV) (RSV pneumonia J12.1, acute RSV bronchitis J20.5, or acute RSV bronchiolitis J21.0) were not found in the hospital medical records during the period of study. However, RSV has been reported to cause up to 16.3% of ARIs in Jamaican children who come to ambulatory clinics. 13 Rotavirus peaks in winter months in Jamaica (December through March), but like RSV, there were no ICD-10 codes attributing cases of diarrhea specifically to rotavirus (A08.0). 14

Infection with HIV is the second greatest contributor to infectious diseases in Jamaica. This finding is consistent with data showing that St. James Parish has the highest prevalence of HIV/AIDS in Jamaica (2.72% of pregnant women were HIV positive in 2001). 15 If applied to the total number of births at CRH (approximately 1,200 per year) an estimated 32 children could be exposed to HIV each year. Children born to mothers infected with HIV are routinely delivered by cesarean section and given a single dose of nevirapine immediately after birth, but are not routinely screened for HIV. Mandatory HIV testing of the mother, newborn, or both, has been shown to decrease vertical transmission and could result in fewer cases of vertical transmission if applied to this population. 16,17

Similar to other developing countries, poisonings in Jamaica are the largest contributor to physical injuries and are more likely to occur in younger children. 10 The shortage of pediatricians and lack of parental education about proper safeguards for kerosene (and other agents) could be related to the high number of accidental poisonings. Sickle-cell anemia is the fourth largest contributor to morbidity in this population. Children in this study population are more burdened than matched cohorts from other developing tropical countries. 6,10,18

Children in western Jamaica who are treated at public tertiary care hospitals have similar disease burdens to children in comparable developing countries. However, children in Jamaica have less neonatal sepsis and malaria but more sickle-cell disease. All indicator diseases except physical injuries disproportionately affect younger children. Health care programs targeting perinatal diseases are desperately needed because these programs would save may lives. Further investigation into causative agents and serotypes of bacteria causing ARIs should be considered for the development of vaccines. Mandatory (opt-out) HIV testing of mothers could significantly reduce rates of vertical transmission of HIV. 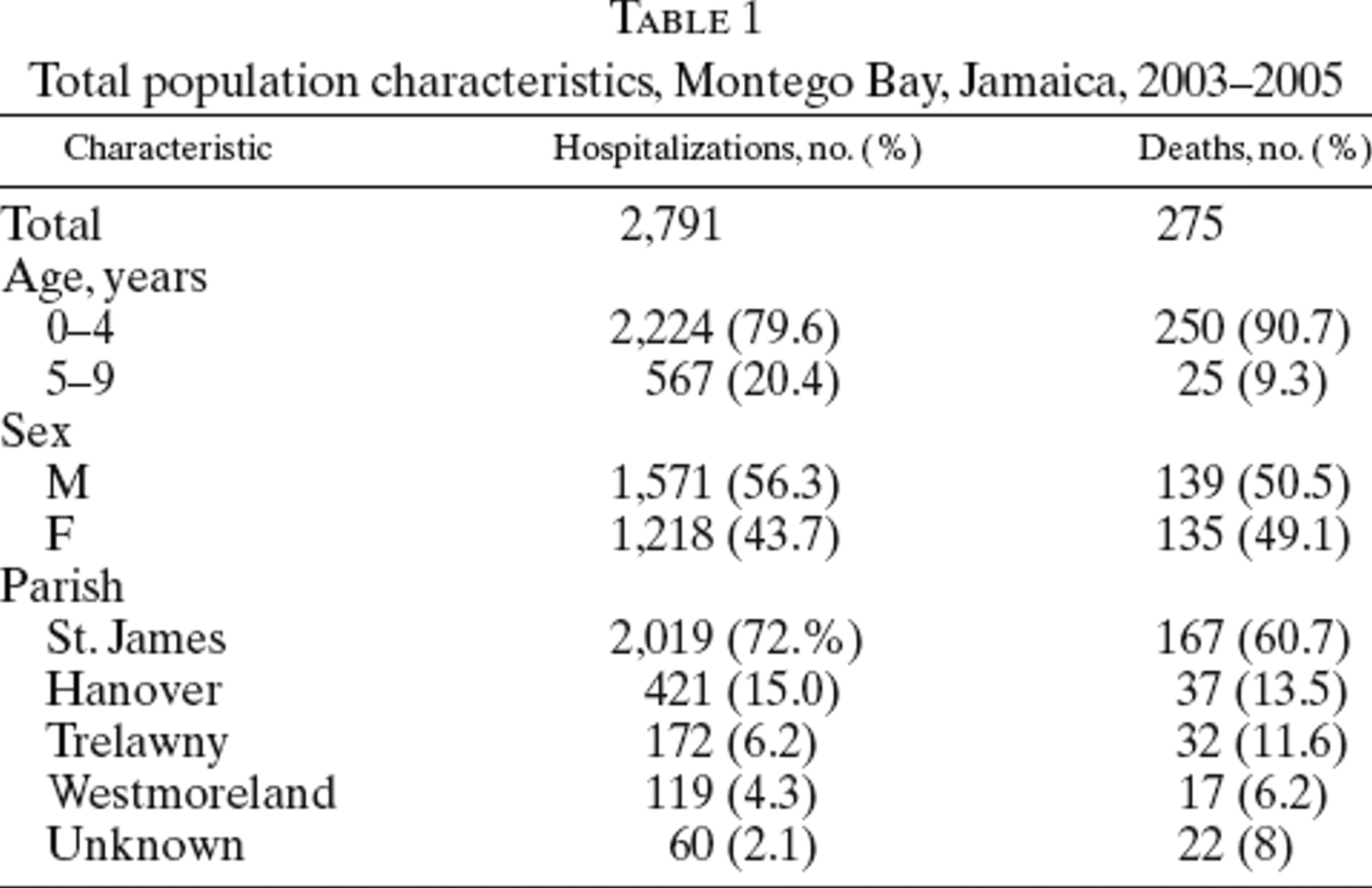 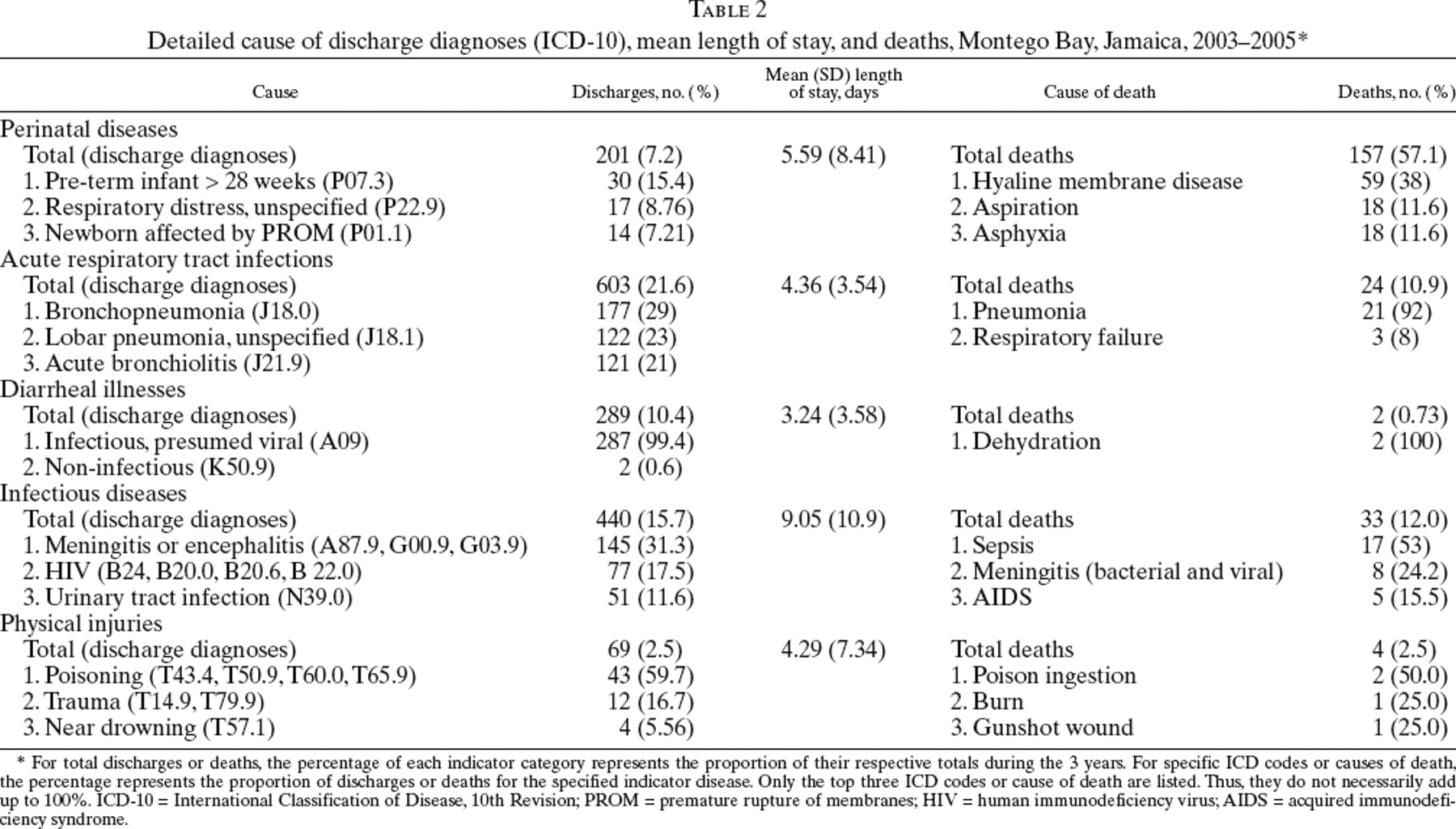