Pafuramidine and its active metabolite DB75. These compounds are aromatic diamidines and close structural analogs of pentamidine.

In vitro activity of DB75 against asexual erythrocytic NF54 Plasmodium falciparum, as assessed by [3H] hypoxanthine incorporation. 28,29 The 50% effective concentration is 7.4 ng/mL. Results of three independent assays are shown. 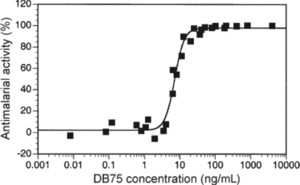 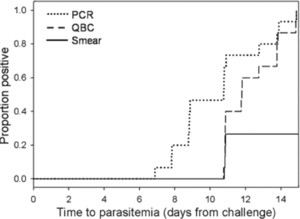 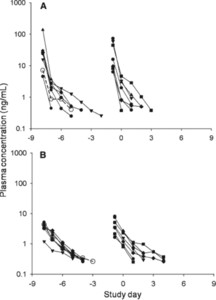 We evaluated the causal prophylactic antimalarial activity of a single oral dose of pafuramidine (DB289), an experimental prodrug of active metabolite DB75, in a randomized, double-blind, placebo-controlled, outpatient study. Sixteen healthy volunteers were dosed and challenged in a single cohort. Subjects were randomly assigned to one of three treatment arms: 100 mg pafuramidine eight days before challenge, 100 mg pafuramidine the day before challenge, or placebo. Challenge was by the bites of Plasmodium falciparum-infected Anopheles gambiae. Malaria developed in 15 persons but did not develop in one person in the day −8 pafuramidine treatment arm. Plasma levels of DB75 were lower than expected, and as intended were too low to provide suppressive prophylaxis at the earliest appearance of erythrocytic parasites. We conclude that a single dose of 100 mg pafuramidine does not adequately protect non-immune individuals against P. falciparum and shows no clinically or statistically significant evidence of causal prophylactic activity.