Aliquots (50 μL) from serially diluted (0.3, 3.0, and 30 × 106 iRBCs in 6 mL) stock cultures were tested using the unified ELISA. The levels of HRPs were consistently higher than pLDH at all iRBC dilutions tested.

Measured amounts of recombinant protein was diluted with quantity sufficient sample buffer to a total volume of (100 μL) per well. The levels of pLDH and HRPs were determined using the unified ELISA protocol and the OD plotted against protein concentration.

Either (10 or 40 μL) aliquots of whole blood were taken from each of six patients with known P. falciparum parasite densities and the relative amounts of pLDH and HRPs measured, using the unified ELISA protocol. Increasing the sample volume from 10 μL to 40 μL greatly improved the relative absorbance for the pLDH versus the HRPs ELISA assay result.

Patients presenting to the Kisumu District Hospital with a presumptive diagnosis of malaria had their parasite density estimated by microscopy. Their plasma pLDH and HRP levels were measured by the unified ELISA protocol and the resulting values compared. 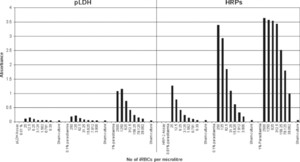 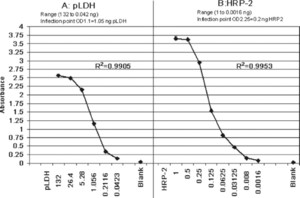 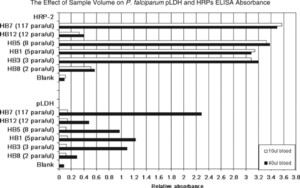 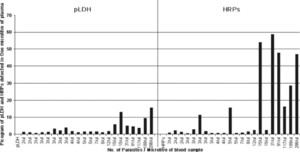 There is a need for more objective and quantitative tools to replace microscopy in malaria diagnosis. Emphasis has recently been placed on alternative methods such as immunochromatography-based rapid tests. However, these tests provide only qualitative results. Two bio-molecules, parasite lactate dehydrogenase (pLDH) and histidine-rich proteins (HRPs), that are released by the intra-erythrocytic stages of the parasite offer certain specific characteristics that could potentially improve malaria diagnosis. In this paper, we describe a protocol for a unified sandwich ELISA that allows for the separate but concurrent measurement of pLDH and HRP biomolecules in aliquots taken from the same samples. Freshly drawn blood from a healthy unexposed adult male was used to serially dilute in vitro cultivated and synchronized ring stage Plasmodium falciparum parasites. Commercially available ELISA formats were modified to allow for the measurement of pLDH and HRP from aliquots of the same samples. The pLDH and HRP levels in the samples spiked with known numbers of infected red blood cells (iRBCs) were measured, and the values were used to generate standard graphs. The standard graphs were used to estimate the numbers of iRBCs in test samples. Serially diluted recombinant proteins were similarly used to generate a calibration curve, allowing for the expression of test results in nanograms of their respective recombinant protein. Levels of pLDH and HRPs were determined by using 1) P. falciparum culture material (cells and medium) 2) P. falciparum infected human blood (N = 6) samples, and 3) plasma from P. falciparum–infected patient (N = 22) samples. The parasite density of all culture and infected patient samples was also estimated by microscopy. Both pLDH and HRP levels correlated positively with the parasite density assessed by microscopy: Pearson correlation coefficient pLDH (r = 0.754, P < 0.0001, 95% CI: 0.47–0.89); HRP (r = 0.552, P < 0.007, 95% CI: 0.16–0.79). The HRPs seem to be released in larger quantities than pLDH (in a ratio of ~1 pLDH:~6 HRP), making the detection of HRP in culture material, blood, and plasma easier. The modified ELISA assay with quantitative measurement of pLDH and HRPs may provide a valuable tool for malaria research and patient management.