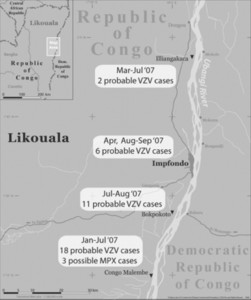 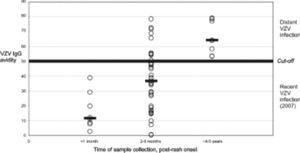 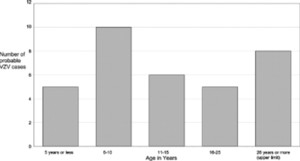 Monkeypox or Varicella? Lessons from a Rash Outbreak Investigation in the Republic of the Congo

Monkeypox virus and varicellazoster virus (VZV) cause visually similar rash illnesses. Monkeypox is more virulent, with fatality rates up to 10%. In June 2007, reports were received of a rash illness outbreak in isolated villages in Likouala district, Republic of the Congo. Blood specimens were obtained from 142 individuals reporting rash illness between January and September 2007 from four villages in Likouala. Thirty-seven cases of probable VZV were identified based on low VZV IgG avidity; cases occurred in all four villages. No probable monkeypox cases with orthopoxvirus-positive IgM responses were observed; however, three possible monkeypox cases, in individuals < 26 years of age, with rash illness occurring > 56 days before sampling and positive orthopoxvirus-specific IgG responses, were identified. Remoteness and delays in reporting limited collection of acute diagnostic specimens. Improvements in rash illness surveillance and infection control, through training of health workers and timely acquisition of diagnostic specimens, are being undertaken.