Cysticercosis-taeniasis survey area in Papua, Indonesia. This figure appears in color at www.ajtmh.org. 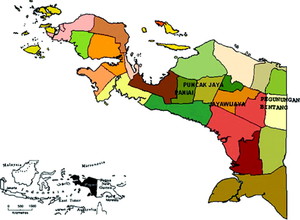 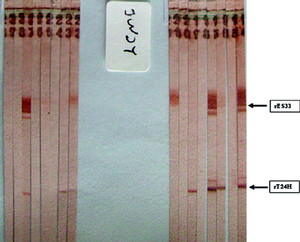 This survey received human subject study approval from the Ethics Commission of Indonesian National Institutes of Health Research and Development.

Survey design used for this study was a three-stage stratified cluster sampling. In the first stage, four central highland districts were chosen on the basis of several studies that reported cysticercosis and taeniasis. These districts were Jayawijaya, Paniai, Pegunungan Bintang, and Puncak Jaya (Figure 1). In the second stage, districts were divided into two strata, flat and hilly regions. For the flat region (Jayawijaya and Paniai), for an estimated prevalence of 50%, a mean household size of 5 persons, an accuracy of three percentage points, an error degree of 5%, and a design effect of 2, we needed 2,134 persons. 18 For the hilly region (Pegunungan Bintang and Puncak Jaya), with an estimated prevalence of 1–2%, the sample size was 406 per district. In the final stage, according to kampong and number of households per kampong data on the basis of probability proportional to size cluster sampling technique, we chose 30 kampongs, 15 households per kampong, and 5 persons per household for the flat region and 30 kampong, 3 households per kampong, and 5 persons per household for the hilly region to fulfill the required sample size. After choosing the kampong based on probability proportional size, for each kampong, households were chosen randomly and all members of households were chosen.

All household members who were ≥ 6 years of age and provided informed consent were chosen for participation in the survey. In the survey, vital data (name, sex, age), and risk factors for cysticercosis and taeniasis (water source, place of defecation, history of T. solium proglottid expulsion, history of seizure, history of unconsciousness, and cysts in the body) were collected through interviews and physical examination (for cysts in the body).

Finger prick blood was collected from all participants. Blood was collected by using Nobuto filter paper (catalog no. 800700; Advantec MFS, Inc., Dublin, CA), which collects 100 μL of whole blood in a predefined area. Filter paper was then stored in a 1.5-mL microcentrifuge tube containing 900 μL of StabilZyme Select (catalog no. PN-S203-2000; SurModics, Inc., Eden Prairie, MN). A combination of Nobuto filter paper and StabilZyme storage buffer was to preserve antibodies contained in the blood sample. 19

Antibodies against cysticercosis and taeniasis were detected by using an enzyme-linked immunoelectrotransfer blot (EITB) strip containing two recombinant antigens specific and sensitive for cysticercosis (rT24H) and taeniasis (rES33) produced at the Centers for Diseases Control and Prevention (Atlanta, GA). 14,16,17 Antibody determination was carried out as follows. An EITB strip was exposed to a blood sample in StabilZyme (serum dilution = 1:20) diluted 1:5 in phosphate-buffered saline (PBS), 0.3% Tween 20, 5% dried-skim milk to give a total volume of 500 μL and incubated at room temperature for 1 hour. The strip was then washed for four times at 5-minute intervals with PBS, 0.3% Tween 20. The strip was then exposed to conjugate (goat antibody against heavy and light chains of human IgG conjugated with horseradish peroxidase) diluted 1:8,000 in PBS, 0.3% Tween 20 for 1 hour and washed twice with PBS, 0.3% Tween 20 and twice with PBS. Color development was established by exposing the strip to diaminobenzidine and 30% H2O2 for 10 minutes. Color development was stopped by washing the strip with distilled water. The result was determined by detecting a reaction line at the place of the two antigens (Figure 2).

Distributions of age, sex, water source, and place of defecation.

A total 2,931 persons from 4 districts, 30 subdistricts, and 98 kampongs in Papua were interviewed. Proportions of female and age group in each district were not significantly different. Study population characteristics are shown in Table 1. In general, water sources were rivers, wells, and water catchments (especially in Paniai). None of the households had access to a safe, protected water supply. For place of defecation, most persons used a field or any place they could find. A total of 83% of persons from Paniai reported using pit latrines.

The smallest number of persons reporting expulsion of Taenia sp. worms were in Puncak Jaya and the largest number were in Pegunungan Bintang. There was no statistically significant difference between sex and history of worm expulsion, except in Jayawijaya where males reported having more worm expulsion than females.

Prevalence of cysticercosis and taeniasis.

Relationship of several risk factors and prevalence of cysticercosis-taeniasis.

Although the number of persons examined in this survey did not reach the planned number, the number of kampongs and households chosen fulfilled the sample requirement. Thus, the validity of the data in this survey was maintained. The most important reason for a smaller sample size was the erroneous assumption that in Papua, a typical household has five members. In this survey, we found many families with only one or two children and many families without children. Many families clearly mentioned that they were infertile.

Despite these problems, this survey provided enough samples to give a valid and comprehensive picture of cysticercosis-taeniasis situation in the four districts in the central highland in Papua, Indonesia. This study also used EITB strip assay, which is sensitive and specific for cysticercosis and taeniasis. Thus, survey results reflected a true picture of the prevalence of these diseases in the four districts in Papua, Indonesia.

The prevalence of cysticercosis prevalence in the four districts in Papua, Indonesia is high when compared with prevalence in several other countries such as Peru, Cameroon, and the People’s Republic of China. 20–22 There has been no real improvement in the prevalence of cysticercosis-taeniasis in Papua for nearly 35 years, albeit the awareness that these conditions are dangerous and detrimental to health, economic conditions for the community, and prevention and treatment efforts. 7,10 This results indicate that all control efforts that have been carried out should be reviewed, and technologies shown to control or eliminate these diseases should be used.

An interesting finding in the Pegunungan Bintang district is that the prevalence of taeniasis is higher than that of cysticercosis. The high prevalence of taeniasis could be the beginning of early transmission of taeniasis before transmission of cysticercosis. Another possibility is that the highly specific rES33 antigen recognizes unknown cross-reactive antigens found in that community. To resolve this issue, it will be important to test samples from that community with another antigen, such as rES38, which is also a specific and sensitive assay for taeniasis. 17

The prevalence of cysticercosis-taeniasis in the Puncak Jaya district is not as high as the prevalence in two districts that surrounded it. There are several possible explanations. These include 1) the geographic area of Puncak Jaya is more hilly than the other regions; 2) more teachers from Paniai (who brought their infected pigs with them) came to Jayawijaya than to Puncak Jaya; 3) sociocultural differences between Puncak Jaya and Paniai-Jayawijaya tribes; and 4) a health education for burning infected pigs in Puncak Jaya was successful.

Taeniasis prevalence is high in the four study districts on the basis of detecting antibody against T. solium antigen in serum samples. The best method for diagnosis of taeniasis is a coproantigen enzyme-linked immunosorbent assay that detects T. solium antigen in stool samples. However, in the field, it is easier to get blood from a fingerprick than to obtain stool samples. 27 Although antibody against T. solium is not always correlated with the presence of adult worms, screening persons for taeniasis using an EITB strip is an important step in controlling taeniasis rather than giving mass treatment with niclosamide to the entire whole population.

Age, history of seizures, unconsciousness, and finding cysts are risk factors that can determine whether a person has a positive test result for cysticercosis. History of expulsion of Taenia spp. worms shows a correlation with taeniasis. This finding is an important factor because finding persons with taeniasis is a key factor in stopping the spread of cysticercosis-taeniasis.

Characteristics of the survey population in four districts, Papua, Indonesia, 2007 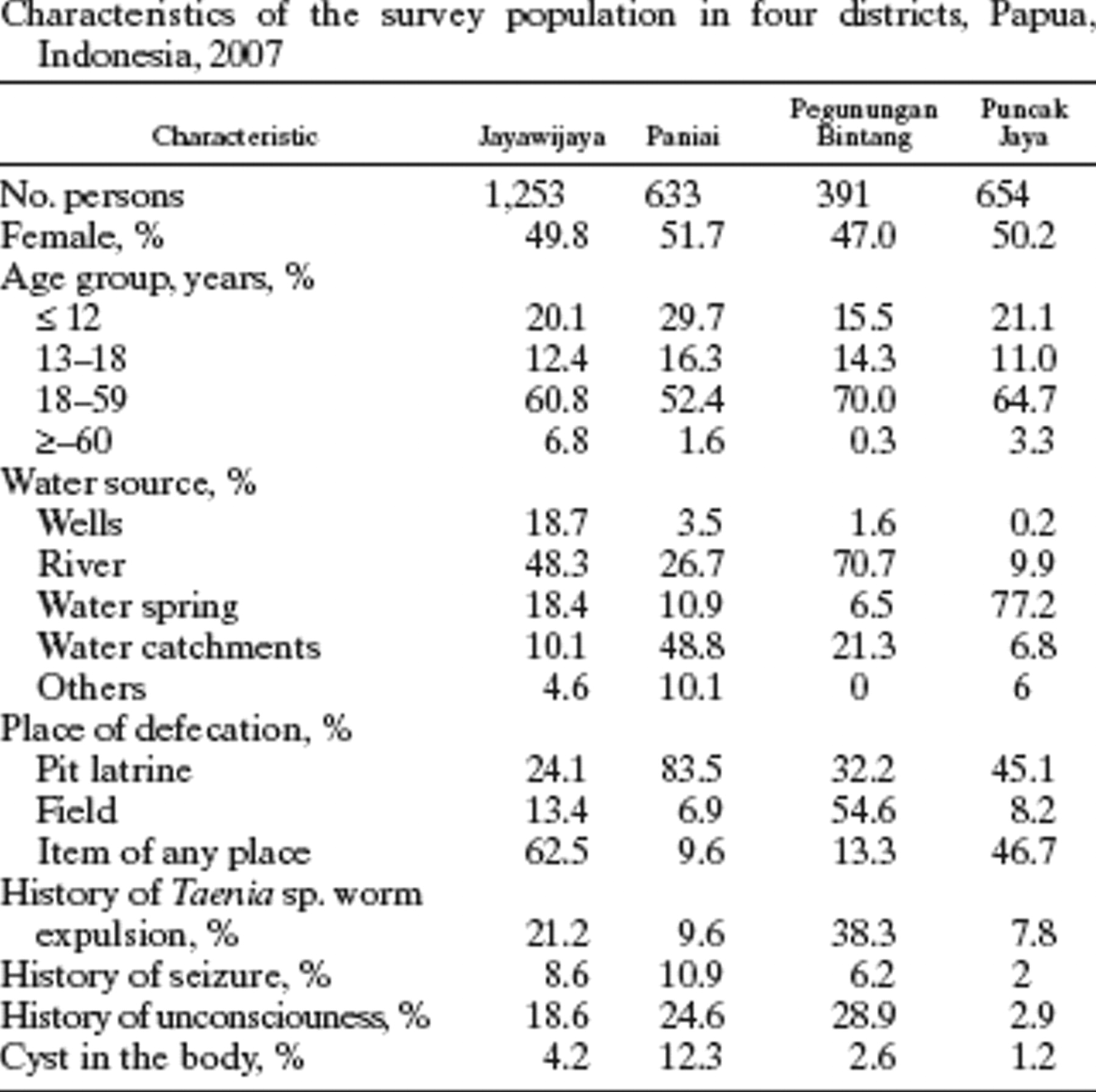 Cysticercosis and taeniasis prevalence in four districts of Papua, Indonesia, 2007

Relationship between sex and cysticercosis-taeniasis prevalence in four districts of Papua, Indonesia, 2007

Relationship between age groups and cysticercosis-taeniasis prevalence in four districts of Papua, Indonesia, 2007*

Relationship between history of seizure and cysticercosis-taeniasis prevalence in four districts of Papua, Indonesia, 2007*

Relationship between history of unconsciousness and cysticercosis-taeniasis prevalence in four districts of Papua, Indonesia, 2007*

Relationship between cyst in the body and cysticercosis-taeniasis prevalence in four districts of Papua, Indonesia, 2007*