Normal mucosa overlying submucosal layer containing numerous Schistosoma eggs. The latter are heavily calcified but are ovoid with a thin shell without or with an inconspicuous, small, lateral, hook-like structure. This morphology is consistent with S. japonicum infestation. This figure appears in color at www.ajtmh.org.

Invasive adenocarcinoma of the classic enteric type invading submucosal layer. Also present are a few calcified S. japonicum eggs. The latter were found in both normal and carcinomatous bowel wall. This figure appears in color at www.ajtmh.org. 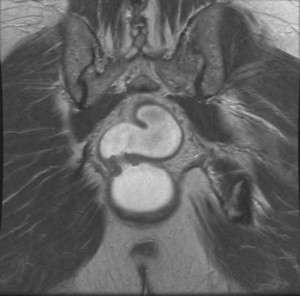 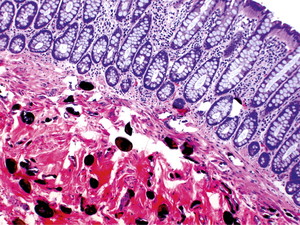 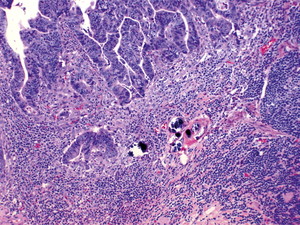 Chronic Schistosomiasis in a Patient with Rectal Cancer

A previously healthy 66-year-old Filipino woman presented with a 2-month history of intermittent rectal bleeding, pain with defecation and a 9-lb weight loss. A 5-cm anal tumor, found on colonoscopy and confirmed by magnetic resonance imaging scan (Figure 1) was surgically removed. Histopathologic examination of the specimen showed a moderately differentiated adenocarcinoma and heavily calcified, nonviable Schistosoma japonicum ova in the rectum, vessels, and lymph nodes (eggs roughly 60 μm in diameter, oval to round in shape with no spine or a small barely detectable subterminal spine). The eggs were predominantly submucosal (Figure 2), with no predilection for carcinomatous versus non-carcinomatous bowel (Figure 3). The patient immigrated to the United States when she was 8 years old (she grew up in rural Philippines, a known endemic region) and had never been to a Schistosomiasis-endemic region since that time. She had, therefore, acquired the infection almost 60 years ago in the Philippines. We speculate that the inflammation caused by chronic S. japonicum infection contributed to the development of rectal cancer. An association between urinary bladder cancer and S. hematobium has been well established1; a similar association between S. japonicum and colon cancer is emerging.2 Early detection and treatment of S. japonicum infection may prevent future development of colorectal cancer.