Flow chart for screening and vaccinations. 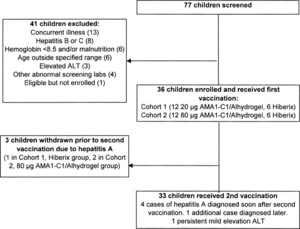 A Phase 1 study of the apical membrane antigen malaria vaccine AMA1-C1/Alhydrogel was conducted in 2–3-year-old children in a village in Mali. A high frequency of elevated levels of alanine aminotransferase (ALT) caused by hepatitis A was seen, with 8 of 36 children diagnosed by specific IgM antibody over the course of the study. Hepatitis A is a common cause of asymptomatic elevations of ALT levels in children, particularly in less-developed settings. Investigators should be aware of the frequency of hepatitis A in this age group to guard against inadvertently facilitating transmission at study facilities and to properly evaluate symptomatic or asymptomatic elevations of ALT levels.

A Phase 1 study in Malian children of the blood stage malaria vaccine Apical Membrane Antigen 1-Combination 1 (AMA1-C1)/Alhydrogel® was conducted in Donéguébougou, Mali.1 Donéguébougou is a village with a population of 1,400 persons located 30 km from Bamako. Malaria studies have been conducted in this village by the Malaria Research and Training Center of the University of Bamako since 1988. Healthy children 2–3 years of age were screened and 36 children were enrolled and received up to two doses of study vaccine or control vaccine (Hiberix®, Haemophilus influenza B) in a dose-escalating design. The study was conducted under a protocol reviewed and approved by the Institutional Review Board of the National Institute of Allergy and Infectious Disease and by the Ethics Committee of the Faculty of Medicine, Pharmacy and Dentistry, University of Bamako. Community and individual informed consent was obtained from all participants.

Screening occurred in February 2006; eligibility criteria are described in detail elsewhere.1 Two dose cohorts of 18 subjects each were enrolled and vaccinated at 0 and 1 months. The low-dose cohort received first vaccinations on March 16 and the high-dose cohort received first vaccinations on March 31. A local medical monitor reviewed safety data prior to dose escalation, and a data safety and monitoring board (DSMB) reviewed safety data prior to enrollment of a larger cohort for a Phase 2 study. Serum levels of alanine aminotransferase (ALT) were checked at screening, at each vaccination day, and on days 3 and 14 after each vaccination (a total of seven times for each child enrolled during the first six weeks of participation). If other inclusion/exclusion criteria were met, children were eligible for enrollment if the ALT level was < 62 U/L (1.25 times the upper limit of normal [ULN], 49.6 U/L). The protocol defined an ALT level > 10 times the ULN (496 U/L) as a serious adverse event (SAE).

Seventy-seven children were screened, among whom three were excluded for an ALT level above the specified limit (Figure 1). One of these three children also had jaundice, pallor, swelling in the lower extremities, hepatomegaly, and a clinical history of diarrhea. He was subsequently diagnosed with hepatitis A by detection of IgM antibody to hepatitis A virus (HAV); he had a negative result for hepatitis B surface antigen, and no antibodies to hepatitis C. This child lived in a large family compound with other children who were also eligible for participation, and a sibling living in the same compound was enrolled in the study. No other case of elevated ALT levels and icterus was found although six and two subjects had positive serologic results for hepatitis B or C, respectively, at screening.

The 36 children enrolled and vaccinated had ALT levels below the protocol-specified limit at screening and had no acute illness on the day of enrollment. During the period of enrollment and initial follow-up (to day 50), eight children were found to have elevated ALT levels, and seven of them were diagnosed with acute hepatitis A on the basis of presence of antibody to HAV. Three subjects did not receive second vaccinations because of hepatitis A diagnosed after first vaccination and three were diagnosed soon after the second vaccination (Figure 1). One additional case of hepatitis A was diagnosed in the later, less-intensive phase of follow-up, for a total of 8 cases. One child had persistent mild elevation of the ALT level with repeated negative serologic results for hepatitis; for that child the elevated ALT level was graded possibly related to vaccination. The hepatitis A cases were equally distributed in the three treatment groups (2 of 12 in the low-dose group, 3 of 12 in the high-dose group, and 3 of 12 in the control group).

Because the study was double-blinded, the investigators were unaware of the distribution of cases at the time of the safety data reviews. (The DSMB and the medical monitor had access to the study code.) Most cases (5 of 8) were asymptomatic or mildly symptomatic. Three children with hepatitis A were hospitalized for mild dehydration; all had grade 4 elevations of ALT (SAE) and all recovered without complications.

The Phase 2 part of the study began in Bancoumana, Mali, a larger village located 95 km from Donéguébougou in May 2006. Nine additional cases of hepatitis A were diagnosed among the 300 children enrolled at that site (three in the malaria vaccine group and six in the control vaccine group). Three children in the Phase 2 study missed second vaccinations because of hepatitis A.

Hepatitis A infection is transmitted by the fecal–oral route or by contaminated food and water and is common worldwide. The epidemiology and clinical presentation vary between more developed and less developed settings, with a shift towards clinical disease in older persons in areas with greater economic development.2 In West Africa, 80–100% of children have had hepatitis A infection by the age of five.3–5 Cases in young children are often asymptomatic and young children can shed HAV for several months after the onset of clinical illness.6 Transmission may have been facilitated in this case when children and their families were assembled for study participation. Most of the children diagnosed with hepatitis A in this outbreak were asymptomatic or mildly symptomatic, and the diagnosis may have been overlooked in the absence of repeated testing of ALT levels and the close clinical follow-up required during the active phase of this Phase 1 study. Initial interpretation of safety data was complicated by the fact that results for IgM antibody to HAV were initially negative in some children, which reflected the negative window before the appearance of IgM antibodies to HAV.

Several cases of hepatitis A associated with elevated ALT levels were seen in a Phase 1 trial in children of another AMA1 candidate malaria vaccine in Bandiagara, Mali (Thera M, unpublished data), and hepatitis A was reported in a Phase 1 trial in young children of the RTS,S/AS02A candidate malaria vaccine conducted in Mozambique.7 In these trials, hepatitis B and C were also diagnosed in some children. In the study reported here, chronic hepatitis B (positive result for hepatitis B surface antigen) and C (positive enzyme-linked immunosorbent assay result for hepatitis C virus) were exclusion criteria, and no hepatitis B or C cases were diagnosed.

Viral hepatitis is a well-known cause of elevated levels of liver enzymes and should be ruled out in any clinical trial participant with this laboratory abnormality. In this case, acute hepatitis A developed in more than 20% (8 of 36) of the children enrolled in the study; most were detected during the intense period of follow-up. This development resulted in three children not receiving second vaccinations, and three SAEs unrelated to vaccination. Investigators conducting clinical trials in young children in less developed settings should be aware of the common occurrence of hepatitis A outbreaks in this age group to guard against inadvertently facilitating transmission at study facilities through good infection control procedures and to properly evaluate symptomatic or asymptomatic elevations of ALT levels. Interpretation of safety data by reviewers and monitors will also be enhanced by this awareness.