One of the hospitalized children infected with R. rickettsii. Face, hand, and arm before treatment with chloramphenicol (left) and 48 hours after treatment (right). The black arrow indicates a lesion produced by tick bite. This figure appears in color at www.ajtmh.org. 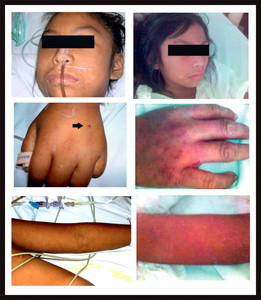 The first human case of infection caused by Rickettsia in Yucatan was detected in 1996, and it was determined that the species was R. felis. Since then, passive epidemiologic surveillance was implemented to search for human cases in the public hospitals of the state, and in 2005, the first human case of Rocky Mountain spotted fever was detected. During the following 2 years, eight new confirmed cases and one probable case were identified. Seven cases involved children younger than 12 years of age, with a fatal outcome in three of the cases. Children are a particularly vulnerable population for this serious emerging infection.

Rocky Mountain spotted fever (RMSF), an acute illness caused by Rickettsia rickettsii, is transmitted by bites of ticks of the genera Dermacentor, Amblyomma, and Rhipicephalus. Described for the first time in the United States in 1899, RMSF has been reported in several countries in the Americas including Mexico.1–6 The importance of RMSF is based on its high mortality and the fact that it can be confused with other febrile diseases. The illness was recognized in Mexico for the first time in the mid-1930s, mainly in the north near the border with the United States. In Yucatan, the first human case was diagnosed in 2005.4 Since then, we have supported the public health services by providing laboratory diagnostic methods for patients that have symptoms suggestive of illness caused by rickettsiae. During 2006 and 2007, among patients suspected to have infections caused by rickettsiae, it was determined that in nine the etiologic agent was R. rickettsii.

Fifty-three patients from Regional Hospital “Agustin O’Horán,” the main public health services hospital, who had 1) signs and symptoms compatible with RMSF infection and 2) negative serologic testing for dengue, were evaluated during the period of January 2006 to December 2007. Polymerase chain reaction (PCR) and immunofluorescence serology (IFA) were used to diagnose the infection. The tests were performed in the Molecular Biology Laboratory of the Universidad Autónoma de Yucatan, Merida, Yucatan, México. An RMSF case was defined according to the 2008 case definition of the CDC.7 A confirmed case was defined as a clinically compatible case with positive PCR, and a probable case was defined as a clinically compatible course and an IgM IFA serology titer of ≥ 64.

Blood was collected in 3.8% sodium citrate as an anticoagulant, and DNA was extracted immediately using the QIAamp DNA kit (QIAGEN, Valencia, CA) following the manufacturer’s instructions. Single-step PCR amplification was performed using genus-specific primers for the rickettsial 17-kd protein gene (5′-GCTCTTGCAACTTCTATGTT-3′ and 5′-CATTGTTCGTCAGGTTGGCG-3′), citrate synthase (gltA) primers (5′-GGGGGCCTGCTCACGGCGG-3′ and 5′-ATTGCAAAAAAGTACAGTGAACA-3′), and a Gene Amp PCR System 2400 Thermal Perkin Elmer (Norwalk, CT) thermal cycler as previously described.4,8 The reactions were performed with 300 ng of DNA, 0.5 μmol/L of each primer, 1× buffer, 0.3 μL de Platinum Taq DNA Polymerase (Invitrogen, Frederick, MD), and double distilled water to a final volume of 50 μL. For 17-kd amplification, the conditions were 35 cycles of 94°C for 30 seconds, 58°C for 45 seconds, and 72°C for 60 seconds; for gltA amplifications, the conditions 35 cycles of 95°C for 20 seconds, 48°C for 30 seconds, and 60°C for 2 minutes were performed. The fragments were cloned in the TOPO TA PCR 2.1-TOPO vector (Invitrogen), and selected clones were sequenced three times with an ABI Prism 310 Genetic Analyzer (Applied Biosystems, Foster City, CA). The sequences were compared with those in the GenBank database by using the Basic Local Alignment Search Tool from the National Center for Biotechnology Information.9

IFA was performed for serologic diagnosis using R. rickettsii antigen fixed on slides. A positive human serum control and IFA slides were provided by the Rickettsial and Ehrlichial Diseases Research Laboratory, University of Texas Medical Branch, Galveston, Texas. Only an acute serum sample was collected from each patient during the period 7–12 days after the onset of the illness. We detected IgM antibodies using a μ heavy chain–specific conjugate. In the fatal cases, the sera were obtained 2–4 hours before the patient died. The positive sera were serially diluted to 1:4,096 to determine the endpoint titer.

Eight confirmed cases and one probable case of spotted fever group rickettsiosis caused by R. rickettsii were detected at the main public hospital in Merida, Mexico. The illness was diagnosed mainly in children younger than 12 years old, with a fatal outcome in three (Table 1). All the children required hospitalization. Fever was the only symptom that was present in all patients. Maculopapular exanthem, neurologic symptoms, nausea, vomiting, diarrhea, abdominal pain, headache, myalgia, and other general symptoms were present in different portions of the patients. The course of illness of the patients younger than 12 years of age was similar. Only children developed neurologic signs and symptoms, including convulsions in three of them. The children lived in poor conditions with dogs, cats, rats, and wild animals in the environment.

The fatal cases were a 9-day-old newborn child with a course of illness of only 24-hours duration and two 8-year-old children who died within 24 hours of hospitalization. The newborn’s illness began with fever, irritability, and icterus. The infant was treated symptomatically for the fever, and 12 hours later was admitted to the emergency room with a purple lesion on the left arm and hepatosplenomegaly. The patient’s deterioration occurred rapidly. One hour after admission to the hospital, purple lesions appeared on the arms, thorax, and abdomen, and 3 hours later, a purple maculopapular rash was nearly confluent over the entire body. Five hours after that, the patient manifested hypotensive shock, bradycardia, and a seizure, and died. A single dose of vancomycin was administered 2 hours after admission to the hospital. Clinical laboratory evaluation showed neutrophil leukocytosis and elevated concentrations of serum urea, bilirubin, and hepatic transaminases. Fatal illnesses in the two 8-year-old children began with non-specific symptoms including fever, nausea, vomiting, and abdominal pain. Four and 6 days, respectively, after the onset of each patient’s illness, a generalized petechial maculopapular rash appeared on the thorax and extremities, and both patients were hospitalized with severe central nervous system (CNS) involvement, convulsions, and a suspected diagnosis of dengue hemorrhagic fever. The clinical laboratory data showed neutrophil leukocytosis, hemoglobin < 9 g/dL, thrombocytopenia, hematocrit < 26%, and elevated concentrations of serum urea and hepatic transaminase. Both children were treated for dengue hemorrhagic fever. The treatment included vitamin K, methylprednisolone, diazepam, and cephalosporin in one child.

The adult patients were men who were 21 and 41 years of age. They presented with fever, abdominal pain, nausea, headache, myalgias, and diarrhea. Skin rash was not present. Both had in common a visit to natural areas 3–5 days before the symptoms appeared, and the 41-year-old patient had a history of tick bite and had ulcerated lesions at the sites of multiple tick bites on the extremities, shoulders, and back.

The diagnosis was established by PCR in all the patients except one of the 8-year-old fatal cases, whose blood sample was not handled appropriately for successful DNA extraction. The DNA sequence of the PCR products had 100% identity to the corresponding genes of R. rickettsii reported in GenBank (accession nos. DQ176856 and DQ115890). The diagnosis was confirmed by IFA serology that showed IgM antibodies reactive with R. rickettsii at titers of 1:256 to 1:1,024 in all the patients except the newborn, who was negative for antibodies against rickettsial organisms. The absence of antibodies this early in the course of RMSF is not unexpected. Although the presence of elevated single titers are strongly supportive of the diagnosis of RMSF, demonstration of a 4-fold rise in titer between acute and convalescent sera is the gold standard for serologic diagnosis.

The number of human cases of RMSF has increased in the Yucatan Peninsula during the last 2 years. We have coordinated passive epidemiologic surveillance for rickettsioses in the main public hospital in Yucatan State and have improved illness detection because of better clinical awareness, although we also suspect an increased incidence. Children under 12 years of age are apparently at higher risk of infection, and their clinical manifestations are severe. Neurologic signs and symptoms were most severe in our pediatric patients, accompanied by other clinical manifestations resembling the infection previously reported in children, with a fatal outcome when the appropriate diagnosis and treatment are not established.10 Indeed, in our cases in children, the presence of neurologic signs was a strong clinical indication of a possible infection with R. rickettsii.

The occurrence of nine cases of Rocky Mountain spotted fever in Yucatan, Mexico, during a 20-month period supports the concept that this tick-borne infection is re-emerging in the Americas. The most likely origin of the emergence of RMSF is from a silent zoonosis that has always been present. The cases could be the consequence of better diagnostic tools, ecologic changes such as deforestation, human invasion into a wild environment, or suburbanization.1,11 Alternatively, in the Yucatan Peninsula, the appearance and increase of human cases of RMSF could be caused by the introduction of domestic animals carrying ticks as a consequence of global trade from regions where infection with R. rickettsii occurs.

In many developing countries in Latin America, febrile illnesses such as dengue viral infections are common and monopolize the attention of the government health departments. For that reason, even when the conditions of living are similar with children living in proximity to animals such as dogs, cats, opossums, mice, and goats, even with well-documented occurrence of human infections caused by R. rickettsii, RMSF is frequently not considered in the differential diagnosis of febrile illnesses.

We used two different antibiotic regimens for our pediatric and adult patients, and both were effective. The availability and the cost are determinant factors for selection of the treatment; for example, the children were hospitalized and were treated with chloramphenicol because, in a public hospital, cost is an important factor. In contrast, the adult patients were ambulatory, and oral doxycycline was the selected antibiotic. The patients showed a similar response with both treatments, with a remission of signs and symptoms in 24–36 hours. Thus, although doxycycline is the drug of choice for all RMSF patients, chloramphenicol improves the outcome compared with other non-tetracycline drugs.12 It is imperative to include the rickettsiosis caused by R. rickettsii in the differential diagnosis of any patient with fever and rash, especially in children. The misdiagnosis and the inappropriate or tardy treatment could be the cause of a fatal outcome.

Patients infected with R. rickettsii diagnosed between January 2006 and December 2007