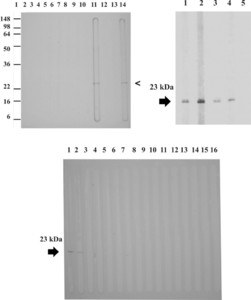 Rickettsia felis infection in humans has been detected worldwide, causing an illness that could be confused with other viral and bacterial infections such as dengue fever. Despite the high incidence of infection in humans, reservoirs, and vectors, the definitive diagnosis of R. felis infection currently requires polymerase chain reaction and sequencing because its antigens are closely related to other rickettsiae, making serologic diagnosis problematic. In this work, we report the immune reactivity of sera from four patients infected with R. felis with recombinant peptides representing regions of outer membrane protein A of R. felis.

The illnesses caused by many species of Rickettsia are easily confused with other viral, bacterial, and parasitic illnesses because of the similarity in their clinical manifestations, making clinical diagnosis a difficult challenge. For example, R. felis infection could be confused with leptospirosis and dengue fever. The patients present with fever, headache, chills, cough, cutaneous rash, nausea, vomiting, and weakness.1–3

Rickettsia felis has been proposed to be a member of the transitional group that is phylogenetically positioned between the spotted fever group (SFG) and the typhus group.4 A characteristic of the SFG and transitional group is the presence of the gene encoding outer membrane protein A (ompA). R. felis possesses a truncated ompA because of premature stop codons in its sequence.5 OmpA is an immunodominant protein that is involved in the rickettsia–host cell attachment process. Despite the presence of premature stop codons, the R. felis ompA gene has some open reading frames, and recently we showed active transcription of segments of the gene, suggesting the possibility of protein translation and the presence of the OmpA in the cytoplasm of R. felis.6

The diagnosis of rickettsial infections has been achieved by techniques including serology (enzyme-linked immunosorbent assay [ELISA] and immunofluorescence [IFA]) and molecular detection (polymerase chain reaction [PCR] and real-time PCR). None of these approaches are 100% sensitive for diagnosing R. felis infection. Limited availability of these methods in many countries and laboratories that lack equipment and training may have resulted in absence of knowledge of the true incidence of R. felis infections. Moreover, for identification of Rickettsia detected by PCR, restriction fragment length polymorphisms (RFLPs) and DNA sequencing are not available for epidemiologic purposes in many countries.

The potential immunogenicity of OmpA encouraged us to evaluate it as a specific and simple method to diagnose infection caused by R. felis.

Two sets of primers were selected to amplify the region containing the first 1,860 nucleotides of the ompA sequence including Domains I and II. Two were modified from the primers previously reported,6 and the other two were designed de novo. The primers Rf190′fw (5′-ATGGCGAATATTTCTCTAAAATTA-3′) and Rf190.800Rev (5′-GTTAATGGCAGCATCTGTATTGTCA-3′) amplify from position 1 to 612; the other set of primers, Rf190.800Fw (5′-TGACAATACAGATGCTGCCATTAAC-3′), and Rf190.1800’rev (5′-ACTCACCACCACCGTTAG-3′), amplify from position 588 to 1,857, a 1,269-bp fragment of ompA. That region was chosen because it contains the first open reading frame that is transcribed.6

Reverse transcription (RT) of the isolated RNA was performed using the Superscript III one-step protocol (SuperScript III One-Step RT-PCR System; Invitrogen, Carlsbad, CA) according to the manufacturer’s instructions. The RT-PCR reactions were performed with primers designed for this work.

For Western immunoblot analysis, 100 μg of the recombinant peptides were boiled for 5 minutes in sample buffer containing (62.5 mmol/L Tris-HCl, 2% SDS, 10% glycerol, 5% 2-mercaptoethanol, and 0.003% bromophenol blue). Subsequently, the samples were loaded onto a 10% SDS-PAGE gel and separated by electrophoresis according to standard methods.7 The samples were transferred to nitrocellulose by electroblotting as described.8 The nitrocellulose was blocked by incubation in TBST-milk (10 mmol/L Tris-HCl, pH 8.0, 150 mmol/L NaCl, 2% Tween-20, and 1% non-fat milk). The recombinant peptides were tested using sera from patients that were diagnosed with toxoplasmosis (Toxo IgM, IgG AxSYM Plus; Abbott Diagnostics, Abbott Park, IL), dengue (RT-PCR, Western blot), leptospirosis (microscopic agglutination test [MAT], ELISA), Rocky Mountain spotted fever, rickettsialpox, and murine typhus (PCR, IFA), and four sera from patients previously documented to have R. felis infection by molecular methods (PCR).3,9 IFA was performed for serologic diagnosis using R. rickettsii, R. akari, and R. typhi antigens affixed to slides and a positive human serum control, each provided by the University of Texas Medical Branch at Galveston (Table 1). All the samples were stored at −70°C until use. As a positive control, we used mouse polyclonal antiserum against the recombinant peptides. Briefly, polyclonal anti-sera were raised in CD1 mice against the 23- and 46-kd recombinant peptides, using complete Freund adjuvant for the first immunization and two booster immunizations with equal amounts of peptides in incomplete Freund adjuvant. Mice were immunized intraperitoneally in weeks 0, 3, and 7. The negative control was the pre-immune sera of the mice.

The sera from the patients who had been infected with R. felis reacted with both recombinant peptides, whereas the sera from patients with other infections did not react with either of the recombinant OmpA peptides (Figures 1 and 2).

Rickettsia felis was first described 17 years ago.10 Since then, it has been reported in all the continents except Antarctica, but it particularly causes human infections in Brazil, Mexico, and Spain.3,9,11–13

Previously we reported transcription of ompA in R. felis despite the condition of its encoding a truncated gene.6 The immunogenicity of the OmpA protein in other rickettsial species encouraged us to test the first open reading frame containing Domains I and II of the R. felis OmpA protein with sera from patients that were diagnosed with signs and symptoms of clinically similar infections and with sera from patients with other rickettsial infections. The sera from the patients diagnosed with an R. felis infection reacted with both parts of the protein, whereas the other sera tested did not react with either recombinant peptide. These results showed the potential use of the recombinant peptides to specifically diagnose R. felis infections in the regions where illness caused by these bacteria is important for the public health.

In Yucatan, as in many tropical regions, febrile illnesses need attention to identify the etiologic agent to provide the correct diagnosis and treatment. For that reason, accurate and easy-to-use methods are required for diagnosis of the most common infections. R. felis is an important infectious agent with most likely a high rate of morbidity in several countries, and thus it is important to develop better and more specific methods to establish a timely diagnosis. Although these results provide a promising alternative to diagnose R. felis infection, the method must be simplified to be feasible for use in regions where the technology is absent or rudimentary.

Heterogeneity in the amino acid sequences of OmpA occurs even among strains from the same area such as R. felis in the state of Yucatan reported in this work and previously (GenBank accession no. AJ563398; Table 2). The heterogeneity could be the consequence of a low natural selective pressure or genetic drift because it is considered to be a nonfunctional gene, but the recognition of the recombinant protein by the sera of infected patients indirectly indicates that the protein is translated and present in the bacteria. Fortunately, the differences in ompA sequences that have been observed are present at specific sites in the amino acid sequence and allow the possibility that the human antibodies may react with segments of the sequence common to all R. felis strains. In this case, the antibodies would be specific and sensitive for the species nevertheless. However, even though this series of four cases is the largest yet reported, more samples need to be tested to confirm the utility of our recombinant peptides as a diagnostic tool, and we wish to investigate samples from patients in other countries and from vertebrate hosts to develop a diagnostic method for human and veterinary use as well as ecologic studies. This method has the potential to be developed in the future as an accurate, specific, and simple method to diagnose R. felis infection.