Percentage of fever in patients with and without delayed defervescence after doxycycline treatment. 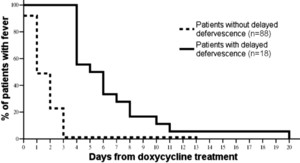