Multiple papulonodular lesions with a few ulcers on lower extremities of the patient. The site where a skin biopsy specimen was obtained from the left leg is shown. This figure appears in color at www.ajtmh.org.

Non-tender ulcerative lesion approximately 3 × 4 cm with an elevated border and a dry necrotic center on the dorsal surface of the left forearm of the patient. This figure appears in color at www.ajtmh.org.

Raised superficial lesion on the nasal aspect of left sclera of a biopsy specimen of the patient. This figure appears in color at www.ajtmh.org. 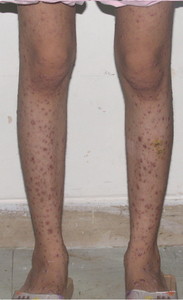 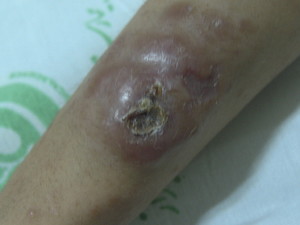 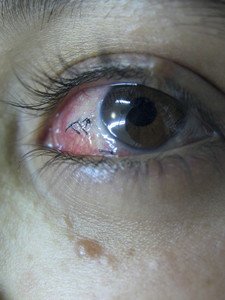 Isolation of Leishmania tropica from a Patient with Visceral Leishmaniasis and Disseminated Cutaneous Leishmaniasis, Southern Iran

We report a case visceral leishmaniasis with disseminated cutaneous leishmaniasis caused by Leishmania tropica in southern Iran. Typing of this parasite was performed by a species-specific polymerase chain reaction and isoenzyme electrophoresis.