Temporal and spatial distribution of confirmed dengue cases in the two-city area in Taiwan. A, An epidemic curve of weekly confirmed dengue cases between May 5, 2001 (Week 1, first identified case) and March 1, 2003 (Week 96). Arrows indicate the appearance of clustering cases in selected areas. B, Spatio-temporal clusters of dengue cases. Axes x and y are geographical coordinates in Taiwan datum (transverse mercator projection). Onset date of each dengue case is labeled as z-axis. Two-city map projected on x–y plane and grayscale was categorized as four different levels according to the number of dengue case per unit of 0.8 km2: (1) < 3 cases (no color), (2) 3–10 cases (light gray color), (3) 11–100 cases (gray color), and (4) ≥ 101 cases (deep gray color). C, Kernel estimated density map of > 10 dengue cases per unit of 0.8 km2 is shown within the zebra line. Population density was presented as the right top corner (in gray to black colors). Arrows indicate the location of the first clustering cases appearing in each of the selected areas by onset week.

Map of spatial-temporal clustering cases in the initial 5 weeks since the first cluster was identified in selected areas. A–D, Locations of dengue cases were label as black dot. A risk area has circled in dash-line as > 2 cases/0.8 km2/wk. Shade area is defined as > 2 cases (light gray) and between 11 and 100 cases (gray) in 0.8 km2 between 2001 and 2003. 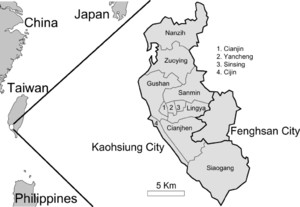 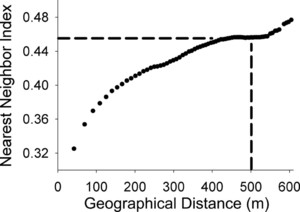 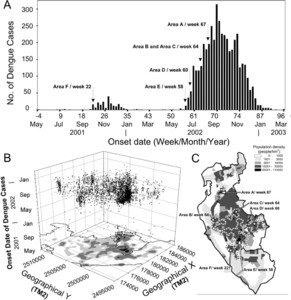 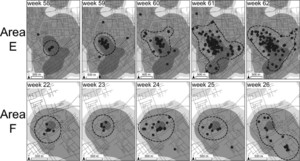 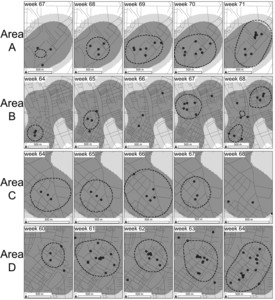 This study analyzed the spatio-temporal patterns of 4,587 (94% of the total) confirmed dengue cases in Kaohsiung and Fengshan Cities (a two-city area) that occurred in Taiwan from 2001 to 2003. The epidemic had two simultaneous distinct diffusion patterns. One was a contiguous pattern, mostly limited to 1 km from an initial cluster, reflecting that there was a rapid dispersal of infected Aedes aegypti and viremic persons. The second followed a relocation pattern, involving clusters of cases that diffused over 10 weeks starting from the southern and moving to the northern parts of the two-city area. The virus from one clustering site jumped to several distant areas where it rapidly dispersed through a series of human–mosquito transmission cycles to several localities. In both patterns, transmission of disease quickly enlarged the epidemic areas. Future dengue control efforts would benefit from a timely syndromic surveillance system plus extensive public education on how to avoid further transmission.