Drug use careers of men and women by age and elapsed time. 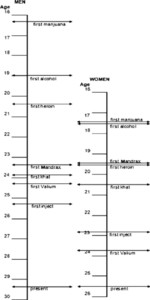 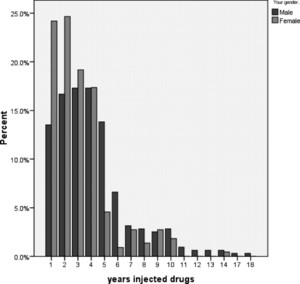 Injection drug use in sub-Saharan Africa is a relatively new phenomenon that expands the repertoire of human immunodeficiency virus (HIV)–associated risk behaviors in Africa. We carried out a study of 537 injection drug users (56% men and 44% women) in Dar es Salaam, Tanzania, to examine their HIV risk behaviors and their drug-using careers that had culminated in injecting heroin. Data were collected in 2005–2006 using the Swahili version of the Tanzanian AIDS Prevention Project questionnaire. Marijuana, alcohol, and heroin were the first drugs reported for both men and women. Most drug milestones appeared in a similar order for men and women. Mandrax, khat, and injecting appeared close to one another in chronological time for both men and women, suggesting they were introduced into the country and appeared on the drug scene at about the same (real) time. Drug careers for women were shorter than for men, and time from first use of heroin to first injection was shorter for women. Years of injecting suggested that injecting had increased in males approximately five years prior to data collection, with males injecting earlier, but females being increasingly introduced to injecting in the previous two years. Injecting appears at a mean of five years (men) and three years (women) into their heroin-using career. Heroin use appears to occur in binges, with women being more likely to have sex during a binge. In this sample, more than 90% of women but only 2% of men reported ever trading sex for money. More than 90% of men and women reported using new needles for injection. These data confirm that heroin injecting is well established in large cities in east Africa, and that HIV prevention in the region must now include drug injectors and other drug users.