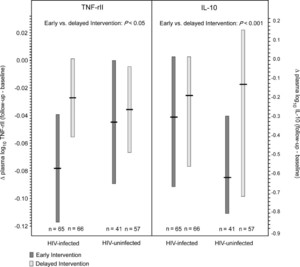 Schistosomiasis and Infection with Human Immunodeficiency Virus 1 in Rural Zimbabwe: Systemic Inflammation during Co-infection and after Treatment for Schistosomiasis

We previously reported that treatment for schistosomiasis in persons infected with human immunodeficiency virus 1 (HIV-1) attenuated HIV replication as measured by plasma HIV RNA. We investigated systemic inflammation as measured by plasma levels of soluble tumor necrosis factor-α receptor II (sTNF-rII), interleukin-8, (IL-8), and IL-10 during schistosomiasis and HIV co-infection and after schistosomiasis treatment. The cohort was composed of 378 persons who were or were not infected with HIV-1, Schistosoma haematobium, or S. mansoni. Schistosomiasis-infected persons were randomized to receive praziquantel (40 mg/kg) at baseline or at the three-month follow-up. sTNF-rII and IL-8 were positively associated with schistosomiasis intensity as measured by circulating anodic antigen (CAA), regardless of HIV status. Interleukin-10 was positively associated with CAA in HIV-negative participants. IL-8 levels were higher in S. mansoni-infected individuals. Treatment for schistosomiasis caused a decrease in levels of sTNF-rII (P < 0.05) and IL-10 (P < 0.001). Our results indicate that schistosomiasis treatment may attenuate HIV replication by decreasing systemic inflammation.