Prevalence of IgG antibodies to excreted-secreted larval antigens of Toxocara canis according to age in Ramal do Granada, Brazil, 2004. The black bar segment indicates the proportion of subjects in each age group with high-titer IgG antibodies (corresponding to the upper quartile of reactivity indices). 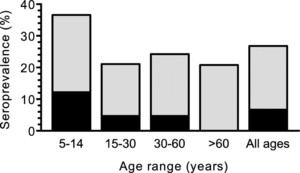 This population-based cross-sectional study of 403 rural settlers in Brazilian Amazonia revealed an overall rate of IgG seropositivity to Toxocara canis excretory-secretory larval antigen of 26.8% (95% confidence interval [CI], 22.5–31.4%). Multilevel logistic regression analysis identified current infection with hookworm (odds ratio [OR], 2.32; 95% CI, 1.11–4.86) and residence in the most recently occupied sectors of the settlement (OR, 1.81; 95%CI, 1.3–2.52) as significant risk factors for Toxocara seropositivity; age > 14 years (OR, 0.46; 95% CI, 0.28–0.73) and the presence of cats in the household (OR, 0.57; 95% CI, 0.32–1.02) appeared to be protective. Two significant high-prevalence clusters were detected in the area, together comprising 38.9% of the seropositive subjects; households in the clusters had slightly lower socioeconomic status and were less likely to have cats as pets. The obstacles for controlling human toxocariasis in this and other tropical rural settings are discussed.