Women in rural Zimbabwe treated at an early age had less genital mucosal contact bleeding upon gentle insertion of a speculum. *Significantly lower prevalence contact bleeding than women who were treated after the age of 20 years. **Significantly less childhood waterbody contact and more urban childhoods, but current waterbody contact was the same as that of the treated population.

Year and age at prior treatment for schistosomiasis, as recalled by women in a rural Zimbabwean area. The type of treatment was according to official Zimbabwean/Rhodesian records.18–24 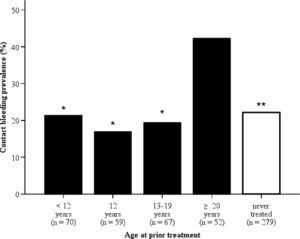 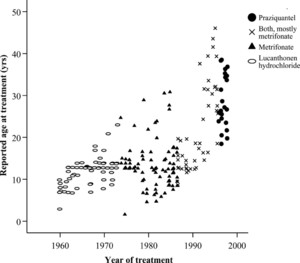 Schistosoma haematobium infection may cause genital mucosal pathology in women with and without urinary schistosomiasis. This report seeks to explore the long-term effect of anti-schistosomal treatment on the clinical manifestations of S. haematobium infection in the lower genital tract. Prior treatment was reported by 248 (47%) of 527 women. Treatment received before the age of 20 years was significantly associated with the absence of sandy patches and contact bleeding, and this association was independent of current waterbody contact. Treatment in the past five years did not influence the prevalence of gynecologic schistosoma-induced lesions. The study indicates that early treatment may be more efficient for gynecologic morbidity control. Findings warrant an exploration into several chemotherapeutic agents administered at an early age, as well as in adults.