Accumulation of SbIII in SAG-S and SAG-R Leishmania donovani field isolates as measured by ICP-MS. Promastigotes were incubated with 100 μM SbIII for 30 minutes at 27°C as described in Materials and Methods. Data are shown as the mean ± SD of two replicate experiments.

Southern blot analysis of the aquaglyceroporin gene in SAG–S and SAG–R Leishmania donovani field isolates. Total genomic DNA was isolated and digested with (A) SalI restriction enzyme, which cuts external to the gene and (B) XhoI restriction enzyme, which cuts once inside the gene. The digested DNA was electrophoresed, blotted, and hybridized with an AQP1 specific probe of 945 bp. The sizes of the hybridizing bands were determined using HindIII digested λ-DNA. The blot was rehybridized with α-tubulin probe to monitor the amount of digested DNA layered on the gel. Lane 1: AG83-S, Lane 2: 2001-S, Lane 3: GE1-R, Lane 4: 41-R, Lane 5: CK2-R, Lane 6: NS2-R.

Expression of aquaglyceroporin at transcriptional level in SAG-S and SAG-R field isolates of L. donovani. (A) Total RNA was isolated from promastigotes, electrophoresed, blotted, and hybridized with AQP1 specific probe of 945 bp (B) RNA amount layered on the gel was monitored by rehybridizing the blots with α–tubulin probe. Hybridization signals were quantified relative to 2001–S and are included within square brackets. Relative transcriptional upregulation and downregulation were indicated by (+) and (−) before numerical value. Lane 1: AG83-S, Lane 2: 2001-S, Lane 3: GE1-R, Lane 4: 41-R, Lane 5: CK2-R, Lane 6: NS2-R. 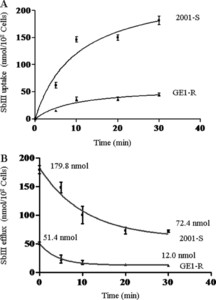 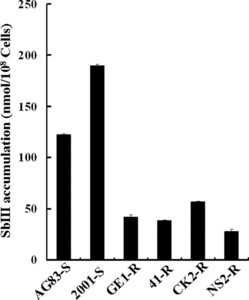 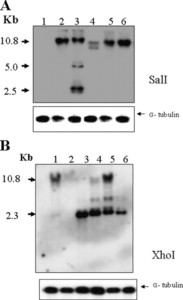 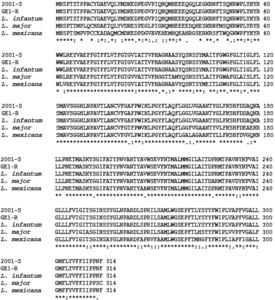 Antimonial-containing drugs are the first line of treatment against Leishmaniasis. Resistance to antimonials in Leishmania is proposed to be due to reduced uptake of trivalent antimony (SbIII) through the aquaglyceroporin (AQP1). We investigated the uptake of SbIII and involvement of aquaglyceroporin in developing antimony resistance phenotype in Leishmania donovani clinical isolates. SbIII accumulation, copy number of AQP1 gene, and transcript levels were compared in antimony-sensitive versus -resistant isolates. Antimony-resistant field isolates showed reduced uptake of SbIII. The copy number of AQP1 gene showed higher copy number in the antimony-resistant isolates when compared with the sensitive isolates and did not correlate to the reduced uptake of SbIII. Downregulation of AQP1 RNA levels was not consistently found in the antimony-resistant isolates. Our studies indicate that while downregulation of AQP1 may be one of the mechanisms of antimony resistance, it is however not an invariable feature.