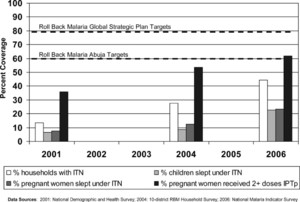 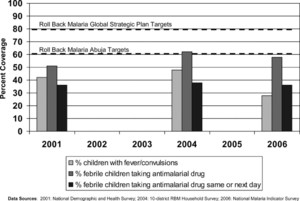 National Malaria Control and Scaling Up for Impact: The Zambia Experience through 2006

With its 2006–2011 National Malaria Strategic Plan, Zambia committed to control malaria at a national scale. This scale-up for impact approach was facilitated by sound business planning and financing in 2006 of approximately US$35 million. Compared with surveys in 2001 and 2004, a 2006 national survey of 14,681 persons in 2,999 households at the end of the transmission season showed substantial coverage increases for preventive interventions. Ownership and use rates of insecticide-treated mosquito nets (ITNs) among vulnerable groups doubled, with 44% of households owning ITNs and 23% of children less than five years of age and 24% of pregnant women using them. Roll Back Malaria Abuja targets for intermittent preventive treatment in pregnancy (IPTp) were exceeded, with 62% of pregnant women receiving at least two doses of IPTp. As of 2006, Zambia is demonstrating substantial progress toward the national targets (80% population coverage rates for the interventions) and aspires to show that malaria need not be its leading health problem, and that malaria control is a sound national investment.