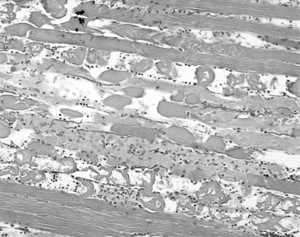 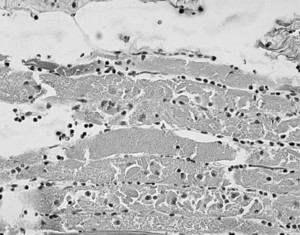 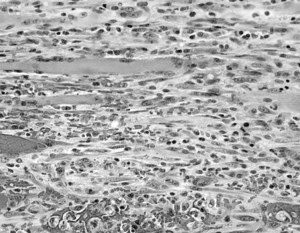 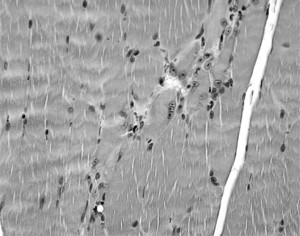 Pharmacokinetic and pharmacodynamic responses were evaluated after intramuscular (IM) injection of artesunate (AS). Twelve dogs were injected with IM AS at 2.5, 5, or 10 mg/kg into the left gluteal muscle. A second injection of only diluent was given in the right gluteal muscle. At 24 hours post-injection, plasma creatine kinase (CK) concentrations were elevated above normal. Muscle biopsies showed myocyte necrosis and acute inflammation, which was worse on the treated side. At 7 days after injection, CK concentrations were normal. Muscle biopsies showed mineralization, fibrosis, and chronic inflammation with less difference between sides. Compared with intravenous administration, IM AS resulted in a prolonged half-life for both AS and DHA. Intramuscular AS also had a lower mean dose-adjusted Cmax and a higher mean dose-adjusted area under the curve; but produced similar concentrations of dihydroartemisinin. These findings suggest that adverse reactions to IM artesunate are minor and temporary which justify further study of this route in treating severe malaria.