Semi-quantification of glycerol-3-phosphate dehydrogenase (GPDH) isozyme expression with the ImageJ program in pools of Triatoma infestans females (A) and males (B) during flight muscle development. 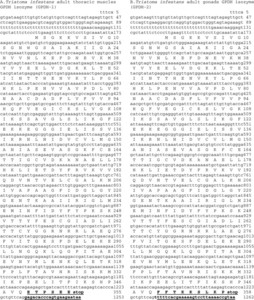 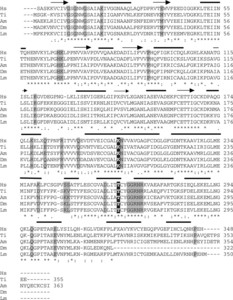 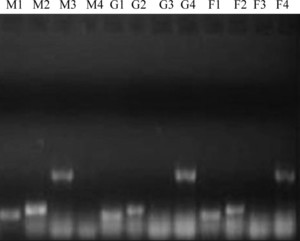 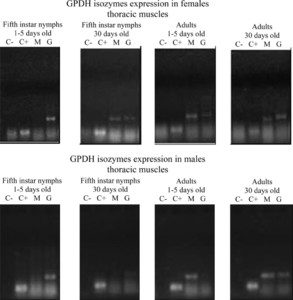 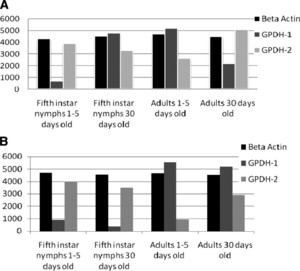 Glycerol-3-phosphate dehydrogenase (GPDH) isozymes are differentially expressed among tissues and during flight development. GPDH-1 is involved in the flight-muscle metabolism and GPDH-2 provides precursors for lipid biosynthesis in many tissues. We have isolated and characterized from Triatoma infestans, a Chagas disease vector, two cDNAs encoding for GPDH-1 and GPDH-2 isozymes. The inferred amino acid sequences showed high identity with other GPDH sequences from flying insects. A GPDH-2 transcript was found in fifth instar nymphs, thoracic muscles, adult gonads, and fat bodies. Both isozymes are present in 30-day-old adult thoracic muscle transcripts, and the pattern of expression differs between sexes. The expression of GPDH-1 begins earlier in females, and GPDH-2 is expressed more abundantly in female adult thoracic muscles than in those from males. This finding is consistent with those of other investigators who showed a higher flight initiation probability in T. infestans females than in males.