Relationship between the frequencies at which culicine and anopheline larvae occurred together. Bars represent SE. 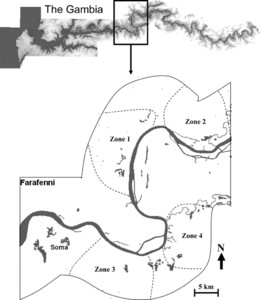 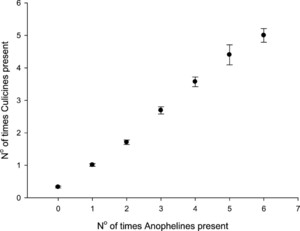 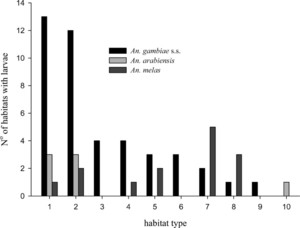 We examined the distribution of aquatic stages of malaria vectors in a 400-km2 area in rural Gambia to assess the practicality of targeting larval control. During the rainy season, the peak period of malaria transmission, breeding sites were 70% more likely to have anopheline larvae in the floodplain of the Gambia River than upland sites (P < 0.001). However, mosquitoes were found in some examples of all habitats, apart from moving water. Habitats most often colonized by anopheline larvae were the largest water bodies, situated near the landward edge of the flood-plain, where culicine larvae were present. In the wet season, 49% of sites had anophelines versus 19% in the dry season (P < 0.001). Larval control targeted at specific habitats is unlikely to be successful in this setting. Nonetheless, larval control initiated at the end of the dry season and run throughout the rainy season could help reduce transmission.