Mean daily weight gain (±SEM) in newborn ICR (A) and CD-1 mice (B) after subcutaneous inoculation (PI) of CHIKV. 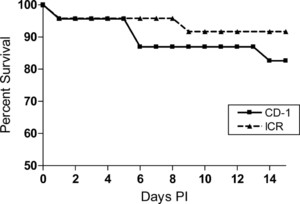 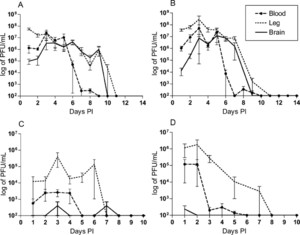 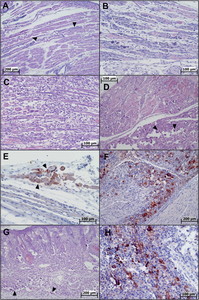 An Animal Model for Studying the Pathogenesis of Chikungunya Virus Infection

Newborn and 14-day-old mice inoculated subcutaneously with chikungunya virus (CHIKV) developed lethargy, difficulty walking, dragging of hind limbs, and reduced weight gain within 7–10 days after infection (PI). During the initial 6–7 days PI, the animals had viremia; high levels (106–108 PFU) of CHIKV were also present in leg muscle. The virus persisted in muscle for several days after viremia disappeared. The major histopathologic changes were in skeletal muscle, which were focal necrosis and inflammation, followed by fibrosis and dystrophic calcification. Some mice also showed dystrophic calcification in the joint cartilage, but there were few deaths, and most of the animals eventually recovered. CHIKV antigen was shown by immunohistochemistry in the muscle for several weeks after infection. Based on the clinical and pathologic similarities with CHIKV infection in humans, young ICR and CD-1 mice offer a useful and realistic model for further study of the pathogenesis and treatment of CHIKV infection.