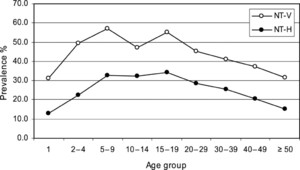 In a highland province of Burundi, indoor residual spraying and long-lasting insecticidal net distribution were targeted in the valley, aiming also to protect the population living on the hilltops. The impact on malaria indicators was assessed, and the potential additional effect of nets evaluated. After the intervention—and compared with the control valleys—children 1–9 years old in the treated valleys had lower risks of malaria infection (odds ratio, OR: 0.55), high parasite density (OR: 0.48), and clinical malaria (OR: 0.57). The impact on malaria prevalence was even higher in infants (OR: 0.14). Using nets did not confer an additional protective effect to spraying. Targeted vector control had a major impact on malaria in the high-risk valleys but not in the less-exposed hilltops. Investment in targeted and regular control measures associated with effective case management should be able to control malaria in the highlands.