Dengue virus (DENV) 1, 2, 3, and 4 monotypic antiserum pools collected from monovalent DENV vaccine recipients. Samples were diluted serially three-fold and assayed by each of three assay methods: plaque reduction neutralization test (PRNT), micro–enzyme-linked immunosorbent neutralization (MN) assay, and dendritic cell (DC) neutralization assay. The log base 10 (log10) of the reciprocal neutralizing antibody titers are shown plotted as a function of the log10 of the reciprocal dilutions (1:1–1:81). For each assay, the cut-off value for a positive result was set at a dilution of 1:10 (reciprocal titer of 10 or 1 log10). 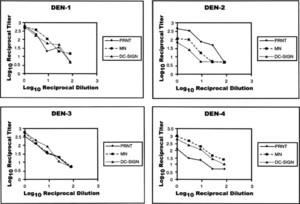 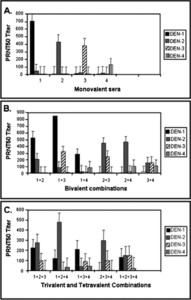 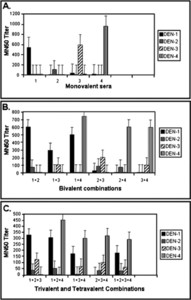 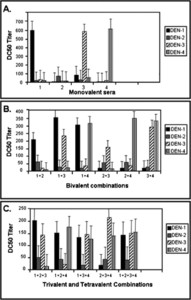 Plaque reduction neutralization tests (PRNTs) are commonly used for measuring levels of dengue virus (DENV) neutralizing antibodies. However, these assays lack a standardized format, generally have a low sample throughput, and are labor-intensive. The objective of the present study was to evaluate two alternative DENV neutralizing antibody assays: an enzyme-linked immunosorbent assay–based microneutralization (MN) assay, and a fluorescent antibody cell sorter–based, DC-SIGN expresser dendritic cell (DC) assay. False-positive rates, serotype specificity, reproducibility, sensitivity, and agreement among the assay methods were assessed using well-characterized but limited numbers of coded test sera. Results showed that all three assays had false-positive rates of less than 10% with titers near the cut-off and generally below the estimated limits of detection. All three methods demonstrated a high degree of specificity and good agreement when used to assay sera and serum mixtures from monovalent vaccinees and sera from patients after primary natural infection, with the only notable exception being moderate-to-high neutralizing antibody titers against DENV 2 measured by PRNT in a mixture containing only DENV 3 and DENV 4 sera. The MN and DC assays demonstrated good reproducibility. All three assays were comparable in their sensitivity, except that the PRNT was less sensitive for measuring DENV 4 antibody, and the MN and DC assays were less sensitive for measuring DENV 2 antibody. However, when used to test sera from persons after tetravalent DENV vaccination or secondary DENV infection, there was poor specificity and poor agreement among the different assays.