Phylogenetic tree of Orientia tsutsugamushi isolated from Linyi and Tai’an districts, Shandong, China, and other O. tsutsugamushi types obtained from GenBank. Numbers at the nodes are bootstrap confidence levels for 100 replicates. 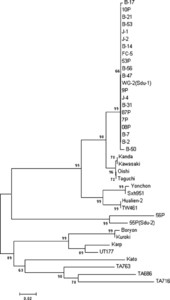 Scrub typhus, also known as tsutsugamushi disease, is a zoonosis that is endemic mainly in the Pacific region of Asia. Classified in the genus Rickettsia, its etiologic agent is now identified as Orientia tsutsugamushi, a Gram-negative obligate intracellular bacterium.1 Clinical manifestations of the disease range from mild fever with few other symptoms such as enlarged lymph nodes, skin rash, splenomegaly, and hepatomegaly to a fatal syndrome characterized by multiple-organ failure.2 Scrub typhus can be treated effectively with tetracycline or doxycycline.3,4

Lying north of the Yangtze River, Shandong Province is located between latitudes 34°25′ and 38°23′ north and longitudes 114°35′ and 122°43′ east. It is a warm–temperate zone with a continental monsoon climate. Average annual temperature ranges from 11–14°C, and precipitation ranges from 550–950 mm per annum. Linyi, a major agricultural area in Shandong, is a typical old epidemic area of scrub typhus in Shandong after its first outbreak in 1986,15 whereas Tai’an District, in the northwest of Linyi District, had its first outbreak of the disease in the autumn of 2000.

To identify the genetic characterization of O. tsutsugamushi in both new and old epidemic areas in Shandong Province, and to provide evidence for disease control and prevention for local communities, Linyi and Tai’an districts—the representatives of old and new epidemic areas, respectively—were selected as study areas. Molecular biology techniques and epidemiological methods were adopted to analyze and compare the nucleotide sequences of O. tsutsugamushi isolated from patients and rodents in the 2 epidemic areas of scrub typhus.

Diagnostic criteria for scrub typhus are as follows:

Scrub typhus can be diagnosed when a patient has 3 of the items described above.16 Such diagnostic criteria are the national criteria in China and are followed by all physicians.

In Linyi and Tai’an districts, acute-phase blood specimens from the scrub typhus patients were collected before antibiotic treatment from September 2004 to December 2006. During the convalescence phase, the spontaneously desquamated eschars were also collected from patients. In Autumn and Winter, the epidemic seasons of scrub typhus in Shandong,17 rodents in the above 2 study areas were captured in patients homes and wild in fields. The captured rodents were examined for infection species, and then spleen tissue was removed from each rodent, using procedures. All specimens were stored at -70°C.

DNA was extracted from the peripheral blood and eschar of scrub typhus patients and from the spleen tissue of rodents by the phenol/chloroform/isoamyl alcohol method. Extracted DNA was finally dissolved in sterilized ultrapure water and stored at −20°C and then used as template for the primary PCR.

The primary PCR amplification was performed by outer primers. The PCR mixtures were composed of 5.0 μL of 10× Ex Taq Buffer (Mg2+ plus), 4.0 μL of dNTP mixtures (each 2.5 mM), 2.5 μL of each primer (10 μM), 1.0 μL of DNA template, 0.25 μL of Ex Taq (5 U/μL; TaKaRa Biotechnology, Dalian, China), and 34.75 μL of ultrapure water added to a final volume of 50 μL. The primary PCR program consisted of 1 cycle of 5 minutes at 94°C, and 30 cycles of denaturation at 94°C for 30 seconds, annealing at 57°C for 2 minutes, an extension step at 70°C for 2 minutes, and an additional extension at 72°C for 10 minutes. Nested PCR was performed using the same conditions as the primary PCR. The primary PCR products as template DNA were re-amplified with the inner primers. The nested PCR products were analyzed by 1.5% agarose gel electrophoresis using ethidium bromide and observed under ultraviolet transillumination. The DL2,000 DNA Marker was purchased from TaKaRa Biotechnology. If 481–507 base pair-specific bands were detected, samples were designated as O. tsutsugamushi-positive.

Specimens of patients and rodents.

All sequences of O. tsutsugamushi isolated from Shandong and other published in NCBI were aligned and compared using the program MEGA3.1. Some sequences were trimmed, whereas 458 bp—the informative region—was conserved and used for nucleotide sequence analysis.

The phylogenetic relationships among these O. tsutsugamushi isolates from Shandong and other O. tsutsugamushi obtained from GenBank were investigated. The Sdu-1 strain in NCBI was the nucleotide sequence of WG-2 isolated from this study, and the Sdu-2 strain was the sequence of 55P isolated from this study as well. As indicated in Figure 1, the phylogenetic tree based on the 56-kDa gene sequence homologies was divided into two branches. The majority of Shandong O. tsutsugamushi isolates, including the Sdu-1 strain, formed an independent lineage distinct from other O. tsutsugamushi, together with Kawasaki, Kanda, Taguchi, and Oishi strains from Japan. There were 95.5–95.9% identities between Sdu-1 and the 4 Japan strains. TW461 and Hualien-2 strains isolated from Taiwan, Yonchon from Korea, and Sxh951 from Shanxi Province, China, belonged to another clade. The 56P and 55P (Sdu-2) isolated from A. agrarius in Tai’an formed a separate clade. The first branch was constructed with the clades described above. The second branch was divided into 3 clades (Figure 1). One clade was formed by UT177 and Karp isolated in Thailand, Boryon from Korea, and Kuroki from Japan. Kato, isolated in Thailand, formed a second clade. TA763, TA686, and TA716, all isolated in Thailand, were located in the third clade.

Homologous comparison among all the O. tsutsugamushi isolates from Linyi and Tai’an districts showed that 55P and 56P had 73.9–76.9% identities with other Shandong isolates. The 55P and 56P isolated from Tai’an were in the same category, with 92.5% identity with each other. Other Shandong O. tsutsugamushi isolates belonged to another category and had 99.3–100% identities among them. The Sdu-1 strain enrolled in GenBank, the representative of major Shandong O. tsutsugamushi isolates, was distributed widely in Shandong Province (Figure 1). In addition, the Sdu-2 strain appeared in Tai’an, a new epidemic focus of scrub typhus in Shandong. At the molecular level, it was proved that the new epidemic area of scrub typhus in Shandong was closely related to the old epidemic area.

In conclusion, our study showed that there was only less genetic variation of O. tsutsugamushi in both new and old epidemic areas in Shandong Province. The Sdu-1 type, similar to Kawasaki type in Japan, was the main genotype of O. tsutsugamushi. For prevention and control of scrub typhus in this area, more attention should be paid to surveillance of Sdu-1 type O. tsutsugamushi, both in human beings and rodents.