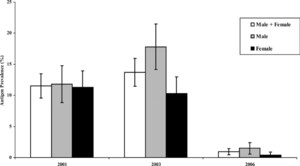 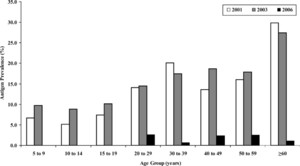 American Samoa began a territory-wide mass drug administration (MDA) program with diethylcarbamazine and albendazole in 2000 after baseline surveys indicated that 16.5% of 2,989 residents were infected with Wuchereria bancrofti based on tests for circulating filarial antigen. Follow-up surveys were conducted in 2001, 2003, and 2006, using convenience samples of residents of sentinel villages. Antigenemia prevalence in 2001 (11.5%) and 2003 (13.5%) showed no change. After the 2003 sentinel assessment, improvements were made in the social mobilization and drug distribution strategies. In 2006, after a total of 5 years of MDA and 3 years of improved MDA participation, the antigenemia prevalence dropped from 11.5% (2001) to 0.95% (2006) (P < 0.0001). In 2006, antigenemia prevalence was greater in males (1.5%) than females (0.4%) (P = 0.04). The decline in antigenemia prevalence shows the effectiveness of MDA and changes made in social mobilization and drug distribution.

The US Territory of American Samoa is a group of small, tropical islands in the South Pacific. The presence of lymphatic filariasis (LF) in American Samoa has long been recognized, but gained more attention after the infection was detected in US service men during World War II.1 Residents of American Samoa received two rounds mass drug treatment with diethylcarbamazine (DEC) in the 1960s that led to great reductions in the prevalence of microfilaremia.2,3 Reid and Kimura4 showed that microfilaria levels remained low for many years after the interventions.

Shortly after the World Health Assembly called for the global elimination of LF in 1997, the Pacific Program to Eliminate Lymphatic Filariasis (PacELF) was organized. One of the first objectives of PacELF was to conduct antigen surveys using a rapid immunochromatographic test (ICT) to characterize the status of the member countries with respect to LF.5,6 Countries with an antigenemia prevalence of > 1% were considered LF-endemic, and mass drug administration (MDA) using DEC and albendazole was initiated to eliminate LF. Based on ICT surveys conducted in 1999, PacELF estimated that 16.5% of residents in American Samoa were infected with Wuchereria bancrofti, the parasite that causes LF.7 American Samoa was one of the four countries with the highest filarial infection levels in the Pacific Region, and the only US territory with recent evidence of W. bancrofti transmission.7

The American Samoa Department of Health (DOH) began a territory-wide MDA program in 2000 with the goal of eliminating LF as a public health problem and has distributed DEC along with albendazole on an annual basis. Annual MDA coverage was reported to be low before 2003, with treatment coverage of the total population < 55%.7,8 In fact, the 2000 and 2001 MDAs were considered by the DOH to represent only a single round of treatment because of the relatively low coverage. After the 2002 MDA, an independent evaluation of the LF program was conducted to improve DOH strategies. In addition, information gathered from community surveys was used to develop a social mobilization campaign to increase awareness of LF and MDA and promote participation in future rounds of MDA. In brief, MDA was shifted from a strategy that was based predominantly on house-to-house distribution to one in which churches took on a primary role in drug distribution. In addition, mass media, including television and radio, were used to increase knowledge of LF and promote participation in MDA (King, unpublished data).

To monitor infection levels in communities with MDA, the World Health Organization (WHO) and PacELF recommend regular (annual or bi-annual) surveillance of filarial infection. We assessed the effect of five rounds of MDA (2000/2001, 2002, 2003, 2004, and 2005) and the effect of strategic changes in the drug distribution and social mobilization activities on the prevalence of filariasis through data from surveillance surveys conducted in 2001, 2003, and 2006 in sentinel villages.

For the 2001, 2003, and 2006 surveillance surveys, the same four sentinel sites were tested: Pago Pago, Fagasa, and Faga’itua, on the main island of Tutuila, and Aunu’u, a small island off the eastern shore of Tutuila. The four villages were selected based on geographical location and expected prevalence based on the 1999 survey. For the 2006 surveillance, the village of Vaitogi on the main island of Tutuila was also surveyed as a spot check site based on WHO recommendations.9 Spot check sites are used to validate results from sentinel site surveys because sentinel sites may not be representative of the entire population because sentinel site residents have greater awareness of LF and participate in MIDA in greater numbers than members of the general population.

At each site, a convenience sample of village residents older than 4 years of age was asked to participate in the survey. Residents who volunteered were requested by the village mayor to meet at a central location to complete a short questionnaire regarding knowledge of LF and participation in previous MDAs and provide a finger prick sample of blood for testing. In addition, for the 2003 and 2006 surveys, mobile teams walked from house to house to test people in and around their homes. Each participant and parents or legal guardians of minors provided verbal consent before testing. Each surveillance survey was reviewed and approved by the American Samoa Government and Centers for Disease Control and Prevention Institutional Review Boards.

A total of 120 μL of blood was collected by finger prick from each study participant. Blood samples were used to test for the presence or absence of circulating filarial antigen (CFA) by ICT. For the 2001 survey, AMRAD ICT filariasis cards (Balgowlah, New South Wales, Australia) were used. For the 2003 and 2006 surveys, Binax ICT filariasis cards (Binax, Portland, ME) were used. In 2001 and 2003, all participants were tested for microfilaremia by microscopic examination of Giemsa-stained 20-μL thick blood films. In 2006, only antigen-positive participants were tested for microfilaremia, usually 15–30 minutes after the antigen test was performed. All testing was done during the day because W. bancrofti is diurnally subperiodic in American Samoa. Each survey was conducted 9–11 months after MDA and before the next round of MDA.

Antigen levels have fallen because of MDA with DEC and albendazole after five annual rounds of treatment in American Samoa. Because methods of surveillance were similar for the 2001, 2003, and 2006 surveys, the results are likely comparable from one survey to the next. A dramatic reduction in antigen levels occurred from 2003 (13.5%) to 2006 (0.95%) (P < 0.0001). This decline occurred after changes were made to the drug distribution strategies and social mobilization campaign in 2003, arguing that improved community participation in subsequent MDAs was associated with decreased antigen prevalence. The most recent survey also showed that no children tested positive for filarial antigen; only adults tested positive, and the majority were men. Dramatic declines in antigen prevalence in this and other programs validate the effectiveness of MDA as a public health strategy.10–16

The absence of infection in persons younger than 20 years of age provides encouraging evidence that transmission of LF has been interrupted in American Samoa; however, it is possible that sensitivity of the ICT test in low transmission settings is not great enough to detect low-level infections. Use of more sensitive antibody tests to detect filarial exposure will be useful at terminal stages of LF programs to assess transmission.17,18 Such studies are critical to determine whether transmission has been interrupted.

PacELF criteria specify that antigen prevalence should be < 1% before stopping MDA. Although overall antigen prevalence in the 2006 survey meets this standard, care must be taken not to extrapolate these results to the entire population of American Samoa. Surveys were based on a convenience sample, and thus, some testing bias is possible. Persons who volunteered for testing were a self-selected group who may be more likely to be compliant in MDA (Table 3). In other programmatic settings, reported sentinel site coverage has been higher than in the general population.14 In addition, residents of the four sentinel sites may be more informed about LF and MDA. The results from Vaitogi, the spot check site, support the conclusion that sentinel site data should be interpreted cautiously. Compliance in Vaitogi was lower, and antigen prevalence was higher (2.1%; Table 2) than in the other four villages. Until the 2006 survey, Vaitogi had only been surveyed in 1999 by WHO, and the antigenemia prevalence in 1999 was 17.9% (Ichimori, unpublished data). The decline in infection prevalence in Vaitogi is not as dramatic as the four sentinel sites but is indicative of the impact that five rounds of MDA have had on the prevalence of LF. These results show the value of assessing filarial infection prevalence in spot check sites before stopping MDA.9

Many of the PacELF countries and territories have completed five to six rounds of MDA, seen dramatic declines in antigenemia prevalence, and must now determine when to stop MDA. This decision is being approached conservatively. In French Polynesia and Samoa, after the cessation of MDA campaigns in the 1970s, microfilaria prevalence rose rapidly.11,19 This increase in prevalence may be related to inadequate drug pressure or to the fact that Aedes polynesiensis, the major vector for transmission in Polynesia, including American Samoa, is a highly efficient vector of filariasis.20 When microfilaria densities decrease, Ae. polynesiensis exhibit limitation, in which larval development is enhanced at low densities of ingested microfilariae.8,21 Because of these characteristics of the vector, monitoring infection in mosquitoes should accompany any additional antigen and antibody surveys to determine whether residual transmission at low prevalence will continue.

Other issues must be addressed before making the decision to stop MDA. Individuals who fail to participate in MDA represent a potential reservoir of infection that can serve as a focus for transmission of LF. In America Samoa, residual infections were concentrated among adult men. Although we did not formally assess compliance in our study, anecdotal reports suggest that compliance in this group is lower than for women or children. Another group who may harbor infections is islanders from other South Pacific countries who come to American Samoa to work. Travel of Pacific islanders between American Samoa and other neighboring countries is common.8 This migrating population also represents a potential reservoir of infection and transmission. Health communication messages and strategies that promote participation in MDA should be developed to target these groups.

Among the four original sentinel sites, one site, Fagaitua, continues to have an antigenemia prevalence > 1% (1.6%). Similarly, the antigenemia prevalence in Vaitogi, the spot check site selected for 2006, was 2.1% (Table 2). Antigenemia prevalence and detection of microfilaria-positive persons argue for continuation of MDA in American Samoa. This is the most conservative option, but it does reflect legitimate concerns about the extent to which the results in the sentinel sites may not be representative of the infection levels across the islands. In addition, it is important to bear in mind that the relationship between antigen prevalence and transmission risk is not known, particularly for Ae. polynesiensis. As an alternative to community-wide MDA, the treatment strategy could be modified to focus specifically on adult men who represent the majority of antigen-positive persons and who would potentially serve as a reservoir for transmission. Another strategy would be to use DEC-fortified salt. This strategy has been highly effective in the reduction of microfilaremia prevalence in China, Taiwan, and India.22 Vector control of Ae. polynesiensis, although admittedly challenging, would also be an additional intervention to help reduce filarial transmission and possibly prevent any resurgence of filariasis once the MDA program is stopped.7

The DOH is planning additional MDAs and discussing potential alternative disease elimination strategies despite the low antigenemia prevalence in sentinel villages. Further evaluation of surveillance strategies is necessary to prevent the resurgence of the disease once MDA programs have stopped.

Comparison of prevalence of filariasis by year of survey, American Samoa

Self-reported participation in MDA before survey by sentinel site, American Samoa, 2003 and 2006