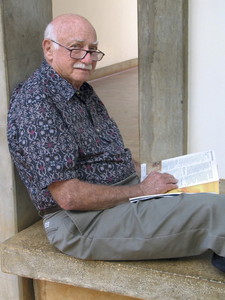 Bob Desowitz’s career in tropical medicine spanned six decades and five continents, leaving us with a wealth of scientific knowledge as well as personal insight into how science gets done and the human impact of tropical disease. Bob received his PhD in medical protozoology in 1951 from the London School of Tropical Medicine and Hygiene as the last student of HE Shortt, who discovered the liver stage of malaria (and who Bob fondly recalled as “the Colonel”). Shortt linked Bob to a scientific lineage that went back to Samuel Christophers and Ronald Ross. Immediately after completing his PhD, Bob moved to the West African Institute for Trypanosomiasis Research in Vom, Nigeria, where he worked until 1960. He hosted many important scientists in Vom, such as Bill Trager, who pioneered the malaria parasite culture system, and Baruch S. Blumberg, who wrote about his time with Bob in his book on the discovery of hepatitis B. In 1960, Bob joined the faculty at the University of Singapore School of Medicine as Chair of Medical Parasitology and spent time in Papua New Guinea, where he later returned to work with Michael Alpers, who directed the Institute of Medical Research there. In 1965, Bob left Singapore to become Chief of the SEATO Laboratory’s Department of Parasitology in Bangkok, where I (LHM) first met him and his family. He became a mentor for me as a neophyte in malaria research, an interest that has stayed with me to this day. In 1968, Bob returned to the United States as Professor of Tropical Medicine and Medical Parasitology at the University of Hawaii and stayed until his retirement in 1995. During his “retirement” in Pinehurst, NC, he was Adjunct Professor of Epidemiology at the University of North Carolina.

One of Bob’s great research interests was in the effects of parasites on pregnancy and particularly the long-term effects on the fetus. While in Nigeria, he observed that short-horned cattle exposed to trypanosomes during pregnancy produced offspring that enjoyed life-long resistance to trypanosomes. He later extended this observation on what he called prenatal immune priming or “PIP” to malaria protection in mice (a seminal study published in

) and malaria sensitization in humans. More than this, he became an avuncular correspondent and mentor to many young scientists who joined this area of research. While working at a relatively isolated station in Kenya, one of us (PED) published his first report on pregnancy malaria in 1996 and shortly thereafter received an unsolicited note of personal introduction and congratulations from Bob, leavened by his signature wit and inimitable writing style. Bob opened his home to many young scientists who came to appreciate through Bob’s rich anecdotes that tropical medicine was a noble discipline of vast importance to human health and also an adventure involving outsized or odd personalities, hilarious incidents, and great failures and successes. As recently as 2004, Bob was in Tanzania educating a new generation of scientists about PIP, other topics in tropical medicine, and their privileged position in a parasitology pedigree that they now shared with Shortt, Ross, and Bob himself.

In 1976, Bob’s career took a new direction when he began writing for the public, drawing on his years of experience working in tropical medicine. He wrote an article for Natural History Magazine, “How the wise men brought malaria to Africa” and followed this with a series of articles in the Magazine that were brought together in his first book, New Guinea Tape Worms and Jewish Grandmothers, which was published in 1987. I (LHM) had the pleasure of writing one of the articles with him, “The Nymphs of Nantucket,” that began with the sentence, “The rich are not like you and me, they go to Nantucket and get babesiosis.” This paraphrase of F. Scott Fitzgerald (Poor Little Rich Boy) reflected his broad knowledge and the wit that would enliven all of his books. His 1988 book, The Thorn in the Starfish, referred to Metchnikoff’s early experiments on cellular immunity in invertebrates, which showed, long before modern immunologists, that the study of immunity in invertebrates informs human immunology. His wonderful book published in 1998, Who Brought Pinta to the Santa Maria, again reflected his unusual ability to turn a phrase and tell a story, as well as his broad knowledge of the introduction of microbes into the Western Hemisphere. The Malaria Capers, published in 1991, may have been his best effort, receiving widespread acclaim and media attention. The writing was driven by his disgust at the illegal misuse of USAID money intended for malaria research to alleviate suffering of children in Africa that was instead diverted for the private gain of an administrator and a few scientists. A quote by Max Perutz, Nobel Laureate and humanist, in the New York Review of Books captures the force of Bob’s writing. “Some years ago I listened to an emotional appeal by a director of the World Health Organization to fight against the parasitic infections that kill millions of children in the Poor World every year. His speech fell flat, partly because the audience regarded it as a well-rehearsed and often repeated performance and partly because mere numbers fail to arouse people’s emotions. In contrast, the opening of Desowitz’s book on tropical diseases strikes to the heart with the story of the illness and unnecessary death of a single child in India. Unnecessary, because the mother could have saved her child had she or the Indian government been able to afford $15 worth of medicine.” One of the great microbiologists of the mid-20th century, René Dubos wrote about the insights from Bob’s books on the interplay of people, politics, and microbes—“the life complexities of the microbial agents of disease are more than matched by that of human behaviour.”