A neighbor-net graph constructed using uncorrected-P distance estimates for all SEO viruses available. Edges are drawn to scale. The graph shows 3 genetic viral lineages could be distinguished among the studied patients in Beijing (circled). The numbers indicate the lineages. 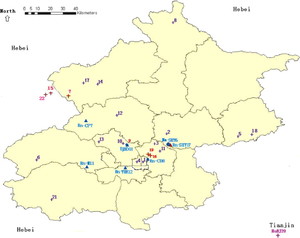 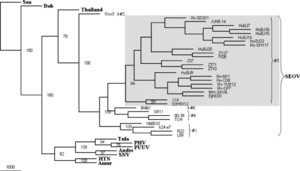 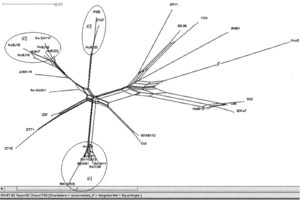 Seoul Virus in Patients and Rodents from Beijing, China

Hemorrhagic fever with renal syndrome (HFRS) is a significant public health problem with an increasing incidence in Beijing, China (report of disease surveillance from the Center for Disease Control and Prevention of Beijing, China). Hantaviruses were detected using RT-PCR method in blood samples of HFRS patients and lung tissues of rodents captured in Beijing. Phylogenetic analyses of 724bp partial S segment of the hantavirus gene showed that the detected Seoul virus (SEOV) fell into three different lineages, two of which circulated in Beijing. A nucleotide sequence identity of 99.7% for one of the cases of HFRS—the human- and Rattus norvegicus-originated SEOV sequences—had only two silent substitutions, suggesting genetic analysis is an essential tool for “case-investigation.”

Hemorrhagic fever with renal syndrome is severely endemic in mainland China accounting for 90% of the total cases reported in the world.8 Although integrated intervention measures involving rodent control, environment management, and vaccination have been implemented, HFRS remains a significant public health problem with 20,000 to 50,000 human cases diagnosed annually.9 HTNV and SEOV carried by Apodemus agrarius and Norway rat (Rattus norvegicus), respectively, are known to be the causative agents of HFRS in mainland China. In recent years, the natural foci of the disease have extended from rural to urban areas, with a remarkable increase of incidence in the novel endemic areas.10

In Beijing, the first HFRS case was reported in 1986 and was shown to be imported from another place.11 Thereafter, a few sporadic cases were diagnosed. Since 1996, the incidence of the disease has increased. It reached more than 200 cases annually in the early 2000s from less than 10 cases annually in the late 1990s (surveillance report from CDC of Beijing, China). In 1989, a strain related to HTNV was detected from a striped field mouse (A. agrarius) captured in the suburbs.12 Recently, epidemiological surveys found that the most common strains of hantaviruses in rodents were SEOV.11,13–16 In this study, we detected SEOV in HFRS patients and rodent hosts captured from the presumed infection sites of the cases to determine the infection sites of HFRS cases, investigate genetic diversity of the viruses circulating in Beijing, and learn more about mutations in the HV genome related to the host-switch.

From 2003 to 2005, blood samples were collected from HFRS patients during their acute phase of illness. All of the clinical cases were diagnosed and confirmed by serologic tests (ELISA kit, Lanzhou Institute of Biological Products, China). After obtaining informed consent, blood samples were collected from each participant. At the same time, related information was obtained through a questionnaire.

In the meantime, rodents were captured using snap traps at the presumed infection sites (Figure 1). After identification of species and sex, lung tissues were removed from the captured rodents and kept in liquid nitrogen until tested. For unidentified species in the field, the craniums were brought to the laboratory for further identification.

Extraction of RNA, RT–PCR, and sequencing.

Phylogenetic analysis was carried out with PHYLIP (version 3.65) software package,19 using the neighbor-joining (NJ) method, with an empirical transition/transversion bias of 2.0. The stability of the phylogenetic tree was evaluated by bootstrap analysis with 1,000 replications. Distance matrices for the aligned segments were calculated by F84 model. Gen-Bank accession numbers of the previously published sequences of the hantaviruses used in this study are listed in the legend of Figure 2.

To better understand the phylogenetic relationship of the virus, Neighbor-net networks were constructed using SplitsTree4 V4.3 software with an uncorrected-P method.20 As the measure of support, the bootstrap values were also estimated by bootstrap analysis with 1,000 replications.

A total of 22 specimens were collected from laboratory-confirmed HFRS patients. Patient samples were obtained between 3 and 15 days after the onset of the illness. The age of the patients ranged from 19 to 70 years with a median of 37.2 years. Most patients were men (18 of 22). They were distributed in a large-scale area (Figure 1) and all were diagnosed during the winter and spring seasons from November to April. The clinical characteristics of the studied patients are summarized in Table 1.

Seoul virus was also detected in 47 R. norvegicus and 1 Mus musculus lung tissue specimens. PCR products of 5 positive samples from R. norvegicus captured in different sites and 1 sample from M. musculus were sequenced. They were designated as Rn-M11, Rn-DC8, Rn-YUE12, Rn-CP7, Rn-SHY17, and Mm-SHY6, according to their rodent hosts and geographical origin (Figure 1).

The nucleotide sequences of the 724bp partial S segment of SEOV genes amplified from the HFRS patients and rodents had 96.3% to 100% homology with each other and 85.1% to 99.9% identity to those of other SEOV deposited in Gen-Bank. The analysis of deduced amino acid sequence of the N protein (aa residues136–371) revealed that the identity was 98.3% to 100%. The nucleotide sequences identity to HTNV, DOBV, and SAAV was 64.4% to 74.1%. Other species of hantaviruses had only 52.1% to 58.7% identity.

The phylogenetic tree constructed by PHYLIP 3.65 software package showed that all strains from Beijing formed a clade within the SEOV subtype #3 according to previous studies,17,21,22 but with low bootstrap values for many lineages (Figure 2), far below the widely accepted 70% threshold limit.23 (No sequences of subtype #2 were included in the study because no sequence long enough could be available.) This was distinct from previous studies in that SEOV sequences could be divided clearly into 6 subtypes.17,21,22

To further illustrate the phylogenetic relationship between strains from Beijing and other strains of SEOV, the neighbor-net graph was constructed using SplitsTree4 V4.3 software. The overall fit index was 97.79% and most branches had bootstrap support values between 70% and 100% (data not shown) when was performed using 1,000 bootstrap samples (Figure 3).

The neighbor-net graph showed that strains from Beijing fell into 3 different lineages. Strain HuBJ9 clustered together with several rodent-originated (wild-type) SEOV strains circulating in Beijing and formed a unique lineage distinct from previously reported SEOV lineage.17,21,22 The HuBJ9 strain detected from patient 9 was most closely related to the rodent-originated strain BjHD01, which had been previously isolated from a Norway rat (R. norvegicus) captured at the location about 200 meters from the residence of the patient 9. The nucleotide identity was 99.7% with only 2 silent substitutions. Five SEOV sequences from HFRS patients, HuBJ7, HuBJ15, HuBJ16, HuBJ19, HuBJ22, clustered together with rodent-originated sequences Rn-SHY17 with 4 to 8 silent substitutions, respectively, suggesting they might share a common evolutionary ancestor. Interestingly, apart from HuBJ15, the other 5 strains had a homologous substitution of aspar-agine to threonine at position 260 of the deduced amino acid sequences of the N protein, which was distinct from all other SEOV. According to the patients’ record, the possible exposed sites for case 7, 15, and 22 were close to one another in the northwest area of Beijing near the common boundary between Beijing and Hebei Province. The possible exposed sites for case 16 and 19 were close to the capture site of the rodent host of strain Rn-SHY17 (Figure 1). Sequence HuBJ20 clustered with strains from Heilongjiang Province,24 which is more than 1,000 km from Beijing; it formed another lineage distinct from the two lineages mentioned above. In the patient’s record there was a note that the patient had occupationally been exposed to rodents in Tianjin City just 9 days before onset of the disease. (The distance between the supposed contact site and Beijing is about 140 to160 km [Figure 1]). This suggests the case was infected outside of Beijing.

S segments were chosen to detect hantavirus RNA in patients and rodent hosts due to more S segment sequences available in the GenBank hantavirus database than that of the M or L genome segment.

Altogether 7 of 22 patients had virus RNA. SEOV strains detected from HFRS patients could be divided into 3 lineages, 2 of them circulating in Beijing. Among them, the first lineage included variants distributed in an area from northwest to southwest, most of which were near the center of Beijing and distinct from previous reported SEOV strains. The second lineage was represented by the variants circulating in northeast and northwest areas comparatively far away from the center of Beijing. The strains in the 2 lineages were geographically intercrossed in northeast areas because the M. musculus carrying strain Mm-SHY6 within the first lineage was captured at the same area with the Norway rat carrying strain Rn-SHY17 within the second lineage (Figure 1 and Figure 3). Notably, in recent years, the highest prevalence in human cases was reported in this area (personal communication, unpublished data). Thus further studies are needed to clarify if the high prevalence is related to complex status of hantavirus or rodents in this area. In addition, most strains within the second lineage diverged from all other SEOV strains on amino acid level. Five of six sequences in this lineage had a single amino acid substitution at position 260 of the N protein. Further studies that include more sequences are required to clarify if the amino acid substitution is the marker of the local strains.

Another purpose of the study was to compare nucleotide sequences of SEOV strains from humans and animal hosts to learn about changes that might accompany the host-switch of the virus. In the present study, comparison of the sequences of SEOV train (BjHD01) obtained from a Norway rat and a HFRS patient (case 9) in the same place showed an identity of up to 99.7% at the nucleotide level with only 2 silent substitutions. The finding suggests a stabilizing selection operating on the protein level of SEOV. To our knowledge, this was the first finding of virtually the most similar viral sequences in a HFRS patient and natural rodent host although Norway rats have been known as SEOV carriers since the early 1980s in China.25 It was reported that cell-adapted variants of PUUV were represented mostly by variants with mutated noncoding regions for S segment.26 Unfortunately, the SEOV sequences recovered from clinical specimens were still short in length, and do not allow for more intensive comparative studies. However, the findings in the study indicate that genetic analysis is an essential tool for “case-investigations” and mapping of natural microfoci of SEOV.