Collection sites for Triatoma brasiliensis specimens in the four localities (A, B, C, and S) in the state of Paraíba (PB), Brazil. Except for S (the sylvatic spot), each locality was divided into two sub-localities (1 and 2).

Maximum parsimony network showing the relationship among the 29 Triatoma brasiliensis haplotypes based on the cytochrome b mitochondrial gene. The left network (a) is coded in localities and the right one (b) in ecotopes. For an explanation of the localities, see Figure 1. The ecotopes are intradomiciliary (I), peridomiciliary (P), ruderal (R), and sylvatic (S).

Neighbor-joining tree derived from linear pairwise FST distances of Triatoma brasiliensis populations. The collection spots are shown in Figure 1. The suffix IP refers to samples collected for well reestablished intradomiciliary plus peridomiciliary infestations, and R to the ruderal ecotope. The code S refers to the sylvatic population. Suffix (i) indicates the samples collected within a short period (0.5 to 1.2 years) after insecticide spraying for A1IPi and simultaneous collections for ruderal (A1Ri). The values used to build the tree are shown in Table 3.

Each spot represents the genetic differentiation of one unique pair of Triatoma brasiliensis populations correlated with (Euclidean) distance. The left scale (gray diamonds) indicates the FST/(1−FST) values between populations from each locality (A, B, C, and S; see Figure 1). The same domiciliary sampling was used for the FST /(1−FST) values indicated on the right axis (black diamonds); ruderal samples were excluded from this analysis. Geographic distances were not log-transformed for circles, representing geographic and genetic correlation within localities. 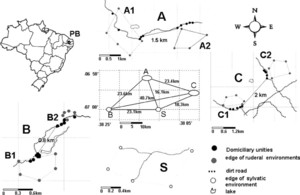 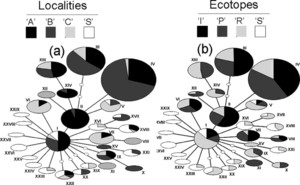 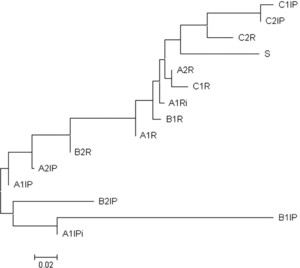 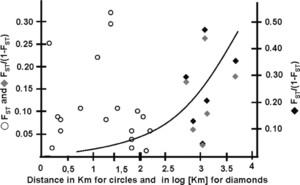 Inferring from the Cyt B Gene the Triatoma brasiliensis Neiva, 1911 (Hemiptera: Reduviidae: Triatominae) Genetic Structure and Domiciliary Infestation in the State of Paraíba, Brazil

The Triatoma brasiliensis genetic structure was analyzed using the Cyt B gene in different geographic locations and ecotopes after a short and long period after insecticide treatment. Four different localities (16–40 km apart) in the state of Paraíba, Brazil, were sampled. Analysis of molecular variance (AMOVA) showed that grouping populations according to the geographic location or ecotope resulted in a higher variance among populations within groups (ΦSC ranging from 0.15 to 0.17) than among groups (ΦCT ranging from 0.04 to 0.07). The percentage of variation was reduced among populations within groups and increased among groups (ΦSC = 0.08, ΦCT = 0.16) by grouping 1) the domiciliary populations from each village and 2) all wild populations. These data indicated that T. brasiliensis is genetically structured both ecologically and at a smaller geographic scale for domiciliary populations. Re-infestations after insecticide treatment were composed of distinct populations, pointing to variable population sources for domiciliary infestations.